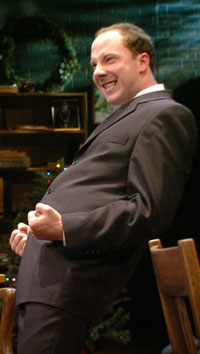 Forget the laws of mathematics; sometimes the whole is less than the sum of its parts. Despite an acclaimed playwright (Conor McPherson, The Weir), a proven director (Joy Carlin) and a first rate cast (Gary Armagnac, Nicolas Pelczar and Holli Hornlien), Aurora Theatre&#146;s production of Dublin Carol lands on the audience with a dull thud. It&#146;s an hour and a half of sound and fury that, sorry to say, signifies very little.

John (Armagnac) is a failure. It&#146;s the drink, don&#146;t you know? In earlier years he descended into the depths of the bottle, alienating his wife, two children and just about everybody else. Rescued by a kindly undertaker he met in a pub, he was given a home and a job just when he had hit bottom. Years later, he is still the undertaker&#146;s assistant, managing his loneliness with just enough booze to keep him going but not knock him out. This is where the play begins, on a Christmas Eve in Dublin.

The undertaker (named Noel, for Christmas, get it?) is in the hospital and John is temporarily in charge. He hires Paul, the 20-year-old nephew of the undertaker (Pelczar) to help him with a funeral and the first third of the play is a conversation between them &#150; about death, about Paul&#146;s girlfriend, about very little &#150; the kind of small talk that both lent charm and built up the tension in The Weir. We are still hopeful at this point.

Paul leaves and John&#146;s daughter, Mary (Hornlein), arrives with the news that her mother is dying of cancer in a nearby hospital and wishes to see him. The news occasions a spate of recriminations and excuses for John&#146;s behavior over the past years. &#147;Why do you love me?&#148; the father asks after she finishes her litany of woe. &#147;Because I can&#146;t help it,&#148; she answers. So that&#146;s the second third, folks. A little more interesting, mostly due to the presence of Hornlein, who plays Mary with sympathetic grace, but not anything to shake up the world.

The girl leaves on a conciliatory note, saying she will be back in a couple of hours to pick him up for the hospital visit. Unable to face his ex-wife, dead or alive, John immediately drinks himself senseless. Big surprise! Paul returns for his wages and they talk some more, this time about his love life, John&#146;s former love life and life in general. All the while they continue to drink. In yet one more lengthy monologue (McPherson has admitted his fondness for the monologue), John reveals that he had an abusive father and that he was too cowardly to defend his mother when she was being beaten. This fear came back when his own children were born and he had to drown it in alcohol. Paul leaves and the clock strikes five, the hour when Mary is set to return. The end.

One has to feel sorry for the actors, who work hard with this material. But you can&#146;t get blood from a stone &#150; even if it is the Blarney Stone. McPherson&#146;s story is so small, his characters so stock that very little sympathy is elicited for anyone but Mary and her mother and brother, who are only talked about, never seen. Shakespeare&#146;s tragic heroes were much more heroic; Eugene O&#146;Neill&#146;s drunks were much more interesting and contemporary playwrights like Brian Friel seem much more Irish. Yet there is only good to be said for the production. Carlin keeps things flowing smoothly, the actors inhabit their characters and Richard Olmsted&#146;s set is properly funereal. It just isn&#146;t a very interesting play.