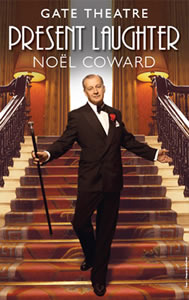 Written as a patently self-serving vehicle for the aging Noël Coward, Present Laughter at the Gate looks tailor-fit to its star, Stephen Brennan. Brennan has played this and other roles like it before, evinced by the use of publicity stills from actual Gate productions as part of the decor, but he seems to truly inhabit this part at this point in his life. His performance the not-too-gracefully-aging Garry Essendine, star of the English stage surrounded by a dedicated entourage of ‘satellites’ is truly is gravitational. An early scene with a bit of business about Garry’s vanishing hairline requires no bald cap, and gives the scene an authentic wistfulness that is at once as playful and as true as it should be. When other characters speak to Garry about age, the audience is conscious of an actor who though not old by any means (Coward was 43 when he originated the role), has as much history behind him as his character has, and also in playing the kinds of roles his character has played. Brennan doesn’t need to reach very far to find the centre of this soul, but he does so with conviction and a sense of absolute ease that belies how skillfully he is balancing the breezy with the hysterical.

Though it may be Stephen Brennan’s finest hour, the show-stealing bit comes from John Kavanagh as the bizarre playwright Roland Maule. This character is usually played as a ‘nervous young man’, and is a transparent bit of reflection on the future of theatre from Coward’s poison pen. Kavanagh, however, is a much older man, and Maule becomes something altogether more wonderfully eccentric in his hands. He delivers a completely surprising characterisation with amazing physical precision. Maule doesn’t sit in a tight little bundle grasping his satchel, he now slopes around the stage like some kind of multi-limbed insect or ungainly simian who creeps and climbs over furniture with an alarmingly not-quite-human comic menace that is a wonder to behold. Kavanagh’s first scene with Brennan is the best, as he seems initially to pratfall onto a couch (ho-hum), but then this bit of decor becomes the stage upon which an extraordinary scene of physical comedy unfolds as he stretches and twists in what might as easily be extreme pain as an attempt to get comfortable. Later on there is also a wonderful bit of inappropriate movement as he invades Garry’s space by crawling onto a chair in an insistent, almost carnal way, and Kavanagh is completely hilarious and admirably in control of exactly when to stop short of crossing the line.

Equally marvellous are Paris Jefferson as Garry’s ex-wife Liz Essendine and Fiona Bell as much-devoted secretary Monica Reed. Again there is palpable precision in every movement, gesture, and vocal inflection here, and Bell is able to give Monica an air of dedicated professional love without succumbing to the cliche of wistfulness. Likewise Jefferson is able to communicate a sense of fierce determination and absolute love without betraying a hint of weak-kneed regret. The play’s early scenes in which Brennan, Bell, Reed, and also Barbara Brennan as the bizarre housekeeper Miss Erikson, Dermot Magennis as Garry’s valet Fred, and Jade Yourell as Daphne, the young lady who has spent the night under Garry’s roof, are brilliantly handled, featuring excellent movement and blocking structured around performances of such snap and vigour that you are completely drawn into this world before you have time to engage your critical faculties.

The action and the sense of delight slows down with the arrival of manager/producers Henry (Michael James Ford) and Morris (Peter Gaynor), and the eventual appearance of Henry’s arachnid wife Joanna (Fiona O’Shaughnessy). These characters aren’t particularly rich in themselves and the performances, though effective, can’t really enliven where the script begins to sag around their rather predictable machinations. Though the final scene encounter between Jefferson and O’Shaughnessy has a marvellous icy violence to it, the distended ‘seduction’ between O’Shaughnessey and Brennan is really much less interesting. Luckily in most scenes there are always at least one or two other ‘satellites’ in there to keep things lively and fun.

Any summer production at the Gate based on well-worn theatre directed by Alan Stanford promises a certain type of experience. At worst, this can be workmanlike, but here, with such a stellar performance at its heart, and one backed by some absolutely brilliant supporting turns, it delivers silky-smooth entertainment, nearly note-perfect storytelling, and as many laughs as you would want from exactly this kind of offering. The play itself drags a little here and there, and the constant in-jokey references to theatres and theatrical people is avowedly self-indulgent, but it’s a very deliberate and direct lampoon of itself that disarms if done well, as it is here. Minor quibbles aside, Present Laughter at the Gate is absolutely delightful, a slick, witty summer entertainment that does not need to beg for one’s indulgence to enjoy – it has the quality of genuine levity that earns its laughter.