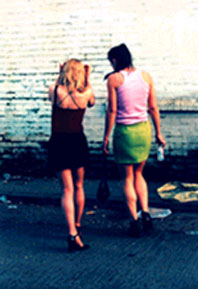 There are some forceful moments in Duck, a play about the rough life lived by teenage girls in contemporary Dublin. It begins with a literal bang, the explosion of an expensive jeep by one Catherine Lynch (Ruth Negga), nineteen year-old girlfriend of loutish nightclub owner and drug dealer Mark (Karl Shiels). It is his jeep that Cat has demolished, drunk and spiteful. She and pal Sophie (Elaine Symons) stagger down the street, and are almost immediately set upon by two behooded youths who attempt to rape them. Sophie repels the attack with a broken bottle, but not before suffering a broken nose. It is not a pretty picture, but it makes a point.

The world of Duck is like a slightly more benign and definitely more feminine version than that of Mark O&#146;Rowe (Crestfall): a world steeped in endemic violence which characters are trapped by a seeming unwillingness to transcend it. Transcendence is at issue though, as the story consciously revolves around Cat&#146;s attempts to find a way to escape. She searches for love, but her gruff exterior, though necessary for survival, may &#145;give the wrong idea&#146; about who she really is. In a confrontation with Sophie, who is going to college to &#145;better&#146; herself, Cat retorts to her friend&#146;s attempts to psychoanalyze her: "Who&#146;s asking you? Listen, I came across my dad&#146;s pay slip and guess what? I&#146;m earning nearly as much as he is. I get cash into my hand, rob a bit from the orange juice money, Make a bit on tips, And I enjoy it as well. I meet lots of different people. I get a lot of attention. Listen, when me and Mark walk into a club We get a table. Do you understand? I&#146;m not going anywhere till I know what I&#146;m doing."

And what is she doing? Well, Feehily would have us believe she is preparing for flight: getting ready to spread her wings and leave behind a world of limitation. The drama is underlaid with avian metaphors. Not only is there the title (derived from Mark&#146;s nickname for Cat, whose feet he thinks are unusually large), Sophie is called &#145;Gull&#146; by her embittered mother (among other things). The finale also explicitly refers to taking flight, though the future for these characters is far from certain.

There is much in Duck which points to a future for Feehily. It is her first full-length play and suffers from some of the obvious flaws of a debut. That said, the play resonates with a vulgar eloquence which could be refined into an effective dramatic voice given time. She writes good dialogue. It flows from the page and the performers easily create a believable and dynamic linguistic world. There are also a number of strong dramatic scenes and a few pointed observations about the delicate balancing game played by a character like Cat in a world where it is all too easy to get hurt. The characterization is a little loose though, and doesn&#146;t always pay off. Sometimes it is obvious that the playwright is pulling the characters&#146; strings, contributing to a slight sense of contrivance.

The play reaches its highpoint with a series of scenes set in a series of baths where, as vulnerable as can be, naked and with her back to each of the two men in her life in turn (Mark and an elderly writer portrayed by Tony Rohr for whom she has temporarily fallen), Cat&#146;s needs are truly revealed. In the third scene she recovers from the second, where she has been attacked and nearly drowned. When she steps out of the tub and stands naked before the audience, the character has literally been stripped bare.

Curiously enough, it is here that it begins to go awry. The play takes an unwise plunge into Cat&#146;s family life, revealing her cliched, country parents (whose accents are impossibly strong to have produced a nineteen year old daughter with such a strong Dublin manner). In an embarrassing series of encounters, the play clumsily tries to add perspective and depth, only to wallow in amateurish and obvious caricature. Casting also creates a new problem here. Negga has stood out throughout not only because her character is the center of the drama, but because the actress is dark skinned. Her &#145;otherness&#146; (purely the result of casting) actually gives a greater dynamism to the drama, throwing her relationships into even greater relief by underlying her &#145;exoticism&#146; in this setting. Unfortunately, the introduction of this rural family with no reference to race whatsoever is unsettling, and no amount of suspension of disbelief can overcome the twin demons of accent and skin color which become points of disjuncture.

The play comes back into focus for its climactic confrontation between Mark and the writer, but then closes out again with an awkward segue into Sophie&#146;s home life, which was introduced earlier then abandoned. Structure seems to be the issue here, and it is just as well that the performers bring a good deal of conviction to their roles. Negga manages to pull a consistent characterization out of something of a psychological muddle, and Symons likewise succeeds in making a not altogether convincing character believable. Shiels is strong in a role which borders on one-dimensional, but he plays his part in the drama as written in all senses of the word. His final speech to Cat to the effect that "We&#146;re no different. You just don&#146;t know it yet" is intriguing, and, again, played with force, but it doesn&#146;t necessarily put quite the cap on things that might have been hoped for.