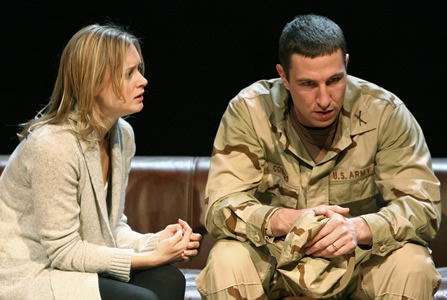 Dying City, the latest play from Christopher Shinn (What Didn’t Happen), is most notable for a stunning tour de force performance by Pablo Schreiber, who plays identical twins in the ninety minute drama. I must admit that I have not always been a fan of Shinn’s writing—watching his plays can be frustrating as he often leaves behind a trail of unanswered questions. In Dying City, he once again stingily doles out clues and introduces unresolved plot points. But in this scorching, riveting production at Lincoln Center Theater, his method serves the play nicely.

Peter, the first twin we meet, springs a visit on Kelly (Rebecca Brooksher), his dead brother’s young widow. Both Peter and Kelly are still mourning Craig, who died (or committed suicide) while doing his first tour of duty in Iraq. A year after the funeral, the pain felt by both remains raw and agonizing. Kelly has dealt with it by withdrawing into herself and spending endless nights alone in her apartment watching re-runs of “Law & Order.” Peter has reached out and tried to contact Kelly, whom he regards as the last connection to his twin. After countless attempts to keep in touch with her with no results, he shows up at her doorstep unannounced and determined to wrap up some unfinished business. What ensues is an evening of arguments, revelations and emotional fireworks.

Peter, an actor whose star is on the rise, is an immature narcissist who seeks to ameliorate his own pain, at whatever the cost. Schreiber is superb in his portrayal of this complex, somewhat selfish being who from the first scene seems to have another motive for the visit. He is one of those rare actors who can play vulnerability with a hint of dangerousness and the character of Peter is as much a victim in pain as an aggressor. Schreiber also plays the other twin, Craig, who in a series of flashbacks, turns out to be equally as complicated as Peter. A Harvard graduate who joined ROTC to pay for school, Craig finds himself with orders to go to Iraq. The irony of the character is that what he really wants to do is teach but as his time of deployment grows near, more violent proclivities surface. His anger seems to be mostly directed at his loyal wife, who on the eve of his departure, can’t seem to elicit any loving gestures, let alone a kind word from her husband. In fact, it appears that for him, escaping to the war in Iraq is preferable to dealing with the disintegration of their marriage.

Kelly and Peter also function as interesting New York archetypes. Kelly is a therapist who has shut down emotionally. Peter is a self absorbed actor seeking to fulfill his own emotional needs at great cost to others. And finally, there is the mysterious Craig — a scholar/soldier who joined the military out of necessity and remains a closed book despite some telling messages he sent to his brother before his death. It is jarring to see Mr. Schreiber as Craig, who is all toughness and vitality because from the play’s first scene, one knows he does not survive his tour. The dying city in the title refers both to Baghdad, a city under siege, and New York, a city that seems to be decaying from within. in the wake of 9//11 and the war.

Complementing Schreiber’s terrific dual performance, Ms. Brooksher does a nice job portraying the beleaguered Kelly, a woman perpetually smarting from the pain of her loss. Neither Peter nor Kelly seem to be able to mourn properly, as Craig’s untimely death has left them stunned and without closure. Mr. Shinn’s play, like life, does not provide any neat endings to death and destruction.