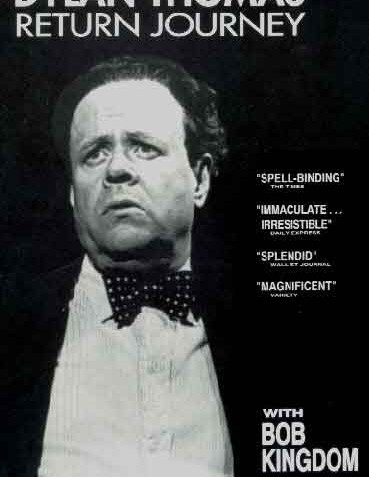 The Poems of Dylan Thomas

"Are you the man with the poems in your head?&#148; a little girl asked Dylan Thomas once, at home in Wales. The poet, who famously drank himself to death at the age of 39,was not only a poet,he was a traveling raconteur, hitting the road,collecting his speaker&#146;s fee at women&#146;s clubs and colleges from the British Isles to San Francisco,becoming something of a post World War II-celebrity.Dylan Thomas: Return Journey marks the fiftieth anniversary of this time.

"Good evening, culture vultures," says a jowly man with apparently sore feet, in a black suit, bow tie, and 1950&#146;s tennis shoes.&#147;Oh, there&#146;s words,&#148; he tells us later…&#148; I write for the love of man…endless churnings in love with the shape and sounds of words.&#148; One-person shows can be affairs in ego-mania, but they can also be lean, focused opportunities to appreciate the bones of theater: text, voice, acting. The show becomes a poem.

In Return Journey, which the actor Bob Kingdom has been touring for almost 20 years, the voice is the thing. Kingdom stands on a bare stage behind a lectern and talks to us, as Thomas, the Welshman who rejected his native tongue for literary fame in English. Kingdom has written that it was a recording of Dylan&#146;s voice, the sound of the words, not the poet&#146;s biography that first attracted him to the idea of portraying the man. And so we get acharacterization of Thomas that is this mellifluous,almost Shakespearean voice offering poems,humorous recollections,and nothing else. Solely by virtue of that voice,those words,and a deeply felt performance,Return Journey is a profoundly effective theatrical event.

Much has been made of the wildly self-destructive nature of Thomas,but here, the emphasis is on Thomas the artist. It is no small irony, however,that the semi-dingy reclaimed movie house where the show had its San Franciscorun,the Victoria, was in a marginal neighborhood in the city&#146;s Mission District, complete with all the tragic characters of urban lowlife milling on the sidewalk outside. Thomas would have smiled.

The format of Return Journey suggests an approximation of one of thecircuit talks.It is a lecture, a recitation,a very funny telling of stories.&#147;There is no nice way of saying vomit, even in Swansea,&#148; he tells us, describing his own behavior on a celebratory trip back home.&#147;Stop the bus, I&#146;ve left my teeth on the mantelpiece,&#148; he recounts, in another saga of the &#147;ancient bad boys&#148; with whom he once headed out into thecountryside on a drinking binge.As for writers, these are &#147;men with elephantiasis of the reputation,&#148; &#147;fat poets with slim volumes.&#147;

Kingdom offers the kind of transparent performance that gives a world of information in the way his Thomas walks on and off, occasionally trembles, goes blank. Despite the cultivated, artificial tone of his speaking voice, this is a subtle portrayal that communicates love and despair in the transitions. There are the dual personae,Thomas the performer and Thomas the man,andKingdom is a master at portraying both–first, in the deftly flat delivery of hilarious statements in &#147;lecture,&#148; then,as he colors the performance with Thomas&#146; personal bleakness in the breaths, glances and spaces in between.

When the time comes for Kingdom&#146;s Thomas to recite, the lights dim,a wavering spotlight holds him in the middle of the darkness, and the words come out out us.Dylan&#146;s poetry and writings (Under Milk Wood, Do Not Go Gentle Into That Good Night, And Death Shall Have No Dominion, A Child’s Christmas in Wales) were generally romantic, nostalgic, often bittersweet. This longing for simpler times explains much about the poet&#146;s popularity, then and now.

&#147;Sometimes being too aware of beauty is a responsibility people can&#146;t handle,&#148; Kingdom once said about Dylan Thomas.In the simplicity of this depiction of a highly sensitive soul, we are given a gift. There is the opportunity, here,thanks to both poet and performer,to reconnect to the heart of the theatrical impulse.