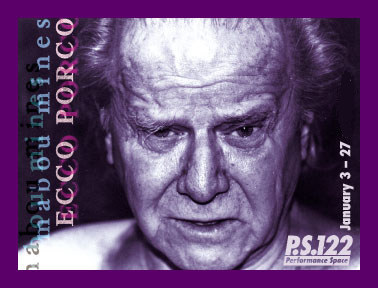 In a scruffy old converted public school in Manhattan’s East Village, Mabou Mines, a bit on the old and scruffy side itself, presents Lee Breuer’s new play, Ecco Porco. Breuer was one of the founders, thirty-one years ago, of Mabou Mines which nowadays makes its home in PS 122 (Public School 122 originally, and now Performing Space 122). The Ecco Porco cast is made up of several actors who were in the company from the beginning, and several others who clearly were not even born then. Watching Ecco Porco is a time-trip into the aesthetic of experimental theatre as it must have existed in the early days of Mabou Mines.

Breuer is a master of visual spectacle created on a shoestring and the production is, in that sense, arresting and flooded with visions and images. He is, as well, a master puppeteer, incorporating the character of John, a human, and Rose, a dog, who are more interesting to look at and listen to than some of the humans.

The plot, such as it is, involves John’s troubled relationship with Rose, as well as his crumbling personal life and short-circuiting brain. But then there’s Russian theatre director V.S. Meyerhold’s fate at the hands of the KGB, Orson Welles pitching a movie on the subject to Warren Beatty, and the wacky ins and outs of a Twelve-Step group called Animations Anonymous at which Marge Simpson shares about her troubled life, as does Porco. It isn’t easy, apparently, to be half human and half pig.

Actors Ruth Maleczech and Frederick Neumann have been with Breuer from the early days, and they have all three earned prestigious awards and grants. Maleczech and Neumann are clearly devoted to the playwright’s work, as are some who show up in the audience to sit through a play that runs about four hours. For the viewer new to the phenomenon of Lee Breuer, however, it is heavy going. There is certainly plenty to look at and listen to, but little of it makes sense in the moment. Words pour out, a sort of verbal sludge, an aural assault, words that seem to mean something as they are being spoken passionately or at least loudly by the actors, but melt away in the mind like bitter cotton candy before there is any kind of meaning that could be summarized an hour later, or even five minutes later. There is humor, some of it worth a brief laugh, but it was a bad sign that the loudest laugher in the audience came from Lee Breuer himself, perched in a back row.

Apparently Breuer is famous for his four hour plays. Every scene, even the ones that seem to have some kind of understandable content, is too long, much too long. Scenes that might play effectively at five minutes are twenty minutes long, with endless repetition. A glorious scene at the end of the play that involves a mesmerizing performance by actor Clove Galilee flying over the heads of the audience, singing and speaking as she spins and glides, is just too long, beginning with an interminable period of strapping her into her flying rig.

For the serious theatre historian who wants a peek at what cutting edge theatre was like thirty years ago, Ecco Porco is definitely recommended. Survival tip: leave after Act One.