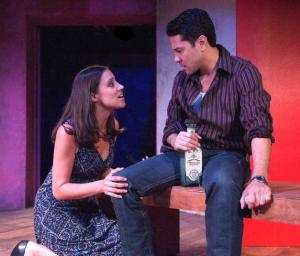 “El Nogalar” means the pecan orchard, and, yes, author Tanya Saracho says her new play at the Fountain Theatre is “inspired by Chekov’s ‘Cherry Orchard.’” But do not panic. There will not be a pop quiz after the one-hour-and-forty-minute, intermissionless performance. There are parallels and echoing themes, but “El Nogalar” holds its own as a story of drug war ravaged northern Mexico, the excesses of privilege, and the yearning of the underclass.

Hacienda Nogales and its pecan orchard have been in the same family for a number of generations. Owner Maité (Yetta Gottesman) and her younger daughter, Anita (Diana Romo), have been living the flashy high life in the U.S. Now their fortunes have changed; Maité has yanked Anita out of her pricey boarding school; the hacienda is in debt to the local drug warlord; penniless, but in a state of oblivion, they are returning to Mexico. Maité has raised denial to high art. Older sister Valeria (Isabelle Ortega), has been keeping the home fires burning as she agonizes over the family’s evaporating assets and the ever-increasing danger that rages around Los Nogales. One very young servant, Dunia (Sabina Zuniga Varela) is left to help with running the hacienda. Dunia can only yearn to move north herself to indulge in the goodies she sees nightly on TV. The only other character is Lopez (Justin Huen). He, too, grew up at Los Nogales but as the son of a servant. Somehow he has become prosperous, walking a fine line between the drug lords and respectability. Unlike the other young men of the town, he has managed to stay alive and avoid mutilation. He cannot tear himself completely away from the hacienda.

Director Laurie Woolery has a heavy hand. Maité bursts on the scene and sustains manic energy throughout. She is played for laughs. Gottesman is all a-jiggle, ample curves emphasized by her plunging neckline and short flouncy skirt; she is one red-hot mama, more nouveau riche than inherited wealth. Her older daughter is the diametric opposite: emaciated, severe, frightened; her youth has been drained out of her. Frederica Nascimento’s set sports the simple hot colors of a Luis Barragan design, but the bare bones of a place where anything of value has been stripped away and sold.

A case can be made for Woolery’s interpretation. Chekov, himself, originally saw “Cherry Orchard” as a comedy, too. But I believe the subtext is partially buried in the process. Issues like the brutality of the drug trade and the yawning gap between the classes are definitely present in “El Nogalar”; however, I believe they are partially eclipsed by heavy-handed direction.

There is no such thing as a bad presentation at the Fountain. But I do not think “El Nogalar” ranks up with the likes of the recent “Bakersfield Mist.” The story arc is developed, the themes matter, but for me the fourth wall is a little too well fortified.