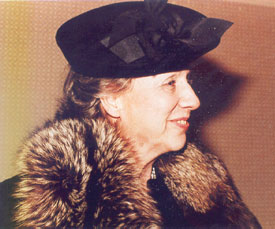 There was a lot of silver hair in the audience at Eleanor: Her Secret Journey last night. That’s understandable: these are the folks who grew up with Eleanor Roosevelt as an icon of caring, humanistic values and independent views, a courageously outspoken woman from an earlier generation and from an echelon of American society where public service from the distaff side more likely would be focused on charity balls. Younger people know who she was, of course, but they don’t get the visceral, reverential response of those who were around before she died in 1962.

In recent years, comments about her by the current first lady and research published by historians into her relationships with women have refocused attention on Roosevelt. Now writer Rhoda Lerman has recycled her 1979 novel on Roosevelt into a one-woman stage vehicle for the indomitable Jean Stapleton.

Lerman’s script focuses on the years immediately following World War I, as recalled by Roosevelt looking back from 1945. It is a very personalized, intimate portrait that carefully sidesteps politics without neglecting political ideals. The choice of period is astute for both dramatic and biographical reasons. Roosevelt’s early life was sheltered by money and class, constrained both by the traditional wife-and-mother role she was expected to play and by insecurities around height and homeliness. All of this was challenged by her husband’s blatant adulteries, by her widening exposure to the world as the wife of a rising politician, and by her observations of the aftermath of the war when the Roosevelts sojourned to Paris. Circumstances and a canny and clear-eyed intelligence catalyzed an ugly duckling into a powerful woman whose greater beauty emerged from the warmth and compassion she brought to issues of war, peace, and human rights.

It’s a story that might ideally be translated into an affecting theatrical experience, but that goal is achieved only intermittently by Lerman’s uneven script and Stapleton’s equally uneven performance. Lerman occasionally captures telling moments and finds fresh words to bring drama and humor into the proceedings. Roosevelt’s dialogues with her aristocratic mother-in-law, for example, are nicely realized, making appropriate fun of the values of the elder ("A Vanderbilt is hardly a model for a Roosevelt!" she sniffs), while demonstrating some resistance from the younger, as her inquiring mind opened to the wider, changing world she saw.

There’s a lovely scene of Roosevelt’s encounter with a soldier who flirts with her at a canteen where she has volunteered. In this fleeting encounter with a stranger, she feels desired in a way that, evidently, her husband never quite achieved. Roosevelt met Bernard Baruch, one of the great minds of the twentieth century, on the ship going to Europe. In her accustomed circles, Baruch was labeled a "Hebrew" and dismissed as "NOKD" ("not our kind, darling"). But Roosevelt befriended him, finding his brightness, generosity, and stands on the issues of the day to be appealing. And the character of Major Duckworth, emotionally mangled by his experience in the trenches, adds dramatic dimension, as Roosevelt comes to understand the horror that was the war she had championed.

But all too often the script dips into tired cliche ("When the fever ended, I knew that something had happened. I was different.") or observations that, however colorful, don’t ring true to character (horses defecating on white carnations). There are major problems with dramatic pacing with a noticeable lull at about the hour point of this hour-and-a-half show. It too often seems a string of incidents instead of a focused piece of theater propelled ahead by dramatic energy.

Stapleton is an accomplished performer, an honored thespian who has had a long career. She has an endearing stage presence and her accumulated skills are admirable. She creates some magic moments in Eleanor, particularly in the parts when she plays both Roosevelt and another character, doing both parts of the dialogue. On the down side, she has a lot of trouble with her lines, repeatedly flubbing and undermining whatever level of dramatic involvement she has accomplished in the preceding moments. (When the same problem occurred in her performance of last year, it might have been attributed to inadequate rehearsal time, but Stapleton has been touring in Eleanor for several months now.)

The low-budget production does little to help – rather ordinary projections on a rear screen which add nothing at all; hackneyed bits of recorded music that detract from, rather than assist the drama.

Despite the problems, something in this show comes through: the voyage of a woman from self-doubt to confidence, her youthful ideals challenged by gritty realities, and, instead of the bitterness or cynicism that might have resulted, the tempered, reinforced idealism that emerged in Eleanor Roosevelt. It’s a great story that merits a better play.