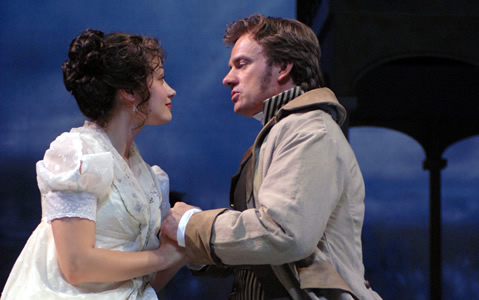 A new musical by Paul Gordon

After the novel by Jane Austen

As Jane Austen might have put it, “Emma,” in its world premiere at TheatreWorks in Mountain View, is a perfectly agreeable show. But no blockbuster. And that’s just fine. Sometimes a Chopin bagatelle can be more satisfying than a Beethoven symphony. Austen is more Chopin than Beethoven anyway, with her refined relationships and delicate sensibilities. This show, which unfolds in a series of short, episodic bursts, is remarkably true to the source, using the dialogue of the original whenever possible.

Adaptor Paul Gordon (“Jane Eyre”) seems to have an affinity for the great female novelists of the early 19th century. His music, well-played by William Liberatore’s small chamber ensemble ensconced atop a kind of gazebo at the back of the stage and well-sung by the cast, is remarkably well-suited to the plot. But don’t count on walking out humming the tunes. They are pleasant but forgettable (with the possible exception of Harriet Smith’s “Mr. Robert Martin” which has been running most annoyingly in the critic’s head for the past 24 hours).

Harriet is the unfortunate protégée of the title character, a mousy little thing whom Emma, a determined matchmaker, has decided to take under her wing. And Dani Marcus nearly steals the show with her big eyes, frequent faux pas and oft-reprised numbers, “Mr. Robert Martin” (see above) and “Humiliation.” Of course, Marcus is only the second female lead and there is no derogation intended toward lovely, talented Lianne Marie Dobbs who makes a delightful Emma. It’s just that Emma is so busy running everybody else’s life that she doesn’t develop as much of a character until the very end.

It is then that Mr. Knightley, a family friend and almost in-law on his brother’s side, realizes that he has been in love with the flighty young busybody all along. And she becomes aware that their frequent disagreements are the stuff that her own dreams are made of. Timothy Gulan is a very good Knightley, stiff and proper until he lets loose in the romantic “Emma,” his belated love song. And this too is the moment when Dobbs becomes human and fallible too. Unfortunately, it comes very late in the game but, hey, Austen wrote it that way.

Other cast members are fine: Brian Herndon as the uptight vicar, Travis Poelle as the dashing, mysterious Frank Churchill and Suzanne Grodner as the poor-but-genteel spinster, Miss Bates, plus an ensemble that doubles as lesser characters and the citizens of Highbury, the town in Sussex where the action is set. The elegant post-Empire costumes are by the ubiquitous Fumiko Bielefeldt and Joe Ragey did the spare but efficient scenic design. Artistic director Robert Kelley directed with his usual skill.

“Emma” is the 50th world premiere developed at TheatreWorks over the past 37 years. That has to be some kind of record for a small regional theater troupe tucked away in a corner of the Bay Area (albeit a very wealthy corner). So, applause for that and applause for “Emma.” Austen’s most durable heroine, and some say her most beloved, has made the transition from the page to the screen (Gwyneth Paltrow’s “Emma” and Alicia Silverstone’s “Clueless”) and now to the stage. Long may she weave her matrimonial web.