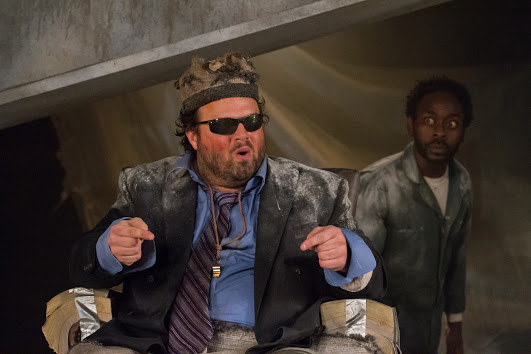 Samuel Beckett busted open theatrical conventions in his plays “Endgame” and “Waiting for Godot,” which remain masterpieces of dramatic lit. By now, Beckett’s allegories and absurdities are so known that they have lost much of their punch onstage. “Godot,” though, has proved more theatrically pliable, but “Endgame”’s scenario of post-apocalyptic existentialism, so scary once, is almost the old normal now.

At the Arden Theatre, the play is set in a gritty urban underground, a collapsed costal highway or annihilated urban tunnel. Instead of a sterile room or seaside cottage, Hamm and Clov are camped out under buckled concrete, with mutilated venting, a crashed car and cinderblock graveyard. Because we are used to the world being blown up and scenarios of no hope played out in real time. This is a very well designed and executed set by Kevin Depinet, which seems at first logical, but ultimately intrudes on the play. The words of Beckett make you feel imprisoned already and this concept of more human debris seems like aesthetic piling on.

Meanwhile, the play’s conundrums are in complete focus by leads Scott Greer and James Ijames, as Clov and Hamm, as they exist out of time in the collapsing space. The monotony of their lives is the dramatic arc to cling to that has to be illuminated with invention and craft. Director Edward Sobel and this cast certainly achieve that.

Greer, in Jack Nicholson shades to cover is burnt-out aqua eyes, reigns from his duct-taped rigged wheelchair, and when he holds his harpoon, he looks like a sea-less Neptune. He is attended to by Clov, his reputedly adoptive son, or foundling or charge, scurries to take orders even as he wonders why he would do such a thing. He checks the whether (“Zero” he reports); he checks the tide (“None”); he hops up a paint ladder (because he can’t bend his knees).

Ijames’ physical comedy has elegant precision on top of a stoically forceful performance. At the end, Clov is given clearer dramatic intent by a mere change of clothes. Ijames is an African American actor playing this absurdist subservient, and this was rightly addressed. Greer is bombastic up front, recalling Orson Welles playing a Southern politician, but his central speech where he tries to tell his tales, just blooms, Beckett’s fragmented reality never more poignant.

The appearance of Nagg, purportedly Hamm’s sire and Nell, the mate, are completely ineffectual figures in this concept. Perhaps sentimentality is projected when they are ensconced in bins in a cottage rather than in oil tubs in a wasteland. Dan Kern and Nancy Boykin have no mooring in this setting, and even though they are seasoned actors, they could stamp them with more something.

Solid direction by Sobel is evident in the crisp pacing and attention to the poetry of Beckett, but it doesn‘t completely avoid some built-in potholes. So to go or not? Hamm and Clov win the day.