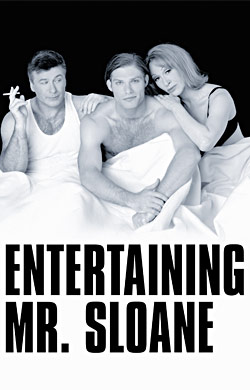 Joe Orton&#146;s 1964 play, Entertaining Mr. Sloane, is a class conscious satire with classic ingredients. It has type characters, no more than an inch thick; gestures bound by social conventions; an intricate plot based in the expression of unacceptable wishes; a shocking climax, uncomfortably like behavior in the comics. The action literally enacts desires usually bottled up in civilized communities: for one, the thwarted sexual desires of a middle aged brother, Ed (Alec Baldwin), and sister, Kath (Jan Maxwell), both excited by the samebrutish, muscle bound boy in his twenties,Mr. Sloane (Chris Carmack). So much for the idea of social and sexual equity.

Maxwell literally climbs all over Sloane in her eagerness to seduce him. Her act is good for some physical comedy.Brother Ed flirts with the boy more subtly. His physical stance along with minor inflections in his voice radiate &#147;come hither&#148; in a game of sexual fencing he obviously has played before. At times his line is&#147;off hand,&#148; that of a pro,at others baldly assertive. It&#146;s a plum role.

Carmack&#146;s Mr. Sloane nearly vibrates with an impersonal, animal violence that erupts, without his particular notice, when he coolly, almost matter-of-factly, kills their father&#150;mercifully the body falls off stage. Report of the act puts Ed into red faced, sputtering shock and rage. The audience reacts more quietly; it takes a minute to realize that the universal impulse of boy against father is being staged in a diabolically clever and hilarious form. Young Sloane&#146;s set piece excusing his bad behavior skewers the social cliches of the time. He had a deprived childhood, he lacked the experience of family warmth, he was an orphan; at which Brother Ed pipes up, &#147;I know just what you mean.&#148;

The back and forth is just sharp enough to keep interest high, yet not sharp enough for high comedy. They&#146;re not &#147;at&#148; each other consistently, there is none of the aggressive posing so integral to high comedy; in a word they lack style. It&#146;s a mistake to aim to be understood or to go for sentiment. The result led to the idea the production played for Americans. The unanswered question is why this revival now, granted that lust and murder are neither topical nor period specific. But neither is Orton quite universal. He appeals to intelligence, to language, to cheerfully heartless objectivity beyond that to be expected from farce on the topics of love, home, baby making and feeling for his fellow man. Woman never enters the arena, by the way.

Set in a boarding house where strangers might meet, somewhere in working class middle England (&#147;Outside of London&#148;), place suggests the backbone of the country where natives, like the landlady Kath, are warm-hearted and stereotypically dim. Ed personifies smug, savvy, energy possessed of new money driving him on his move up. For him the quick one liners, the putdowns, the cheerfully hostile comments on events, while standing in for the author&#146;s point of view. What&#146;s important to him is his new &#147;motor car,&#148; the status symbol par excellence, and the envy of his younger brother, a junior wise guy. The group represent a slice of collected life that looks nasty from every angle. Alec Baldwin is versatile and credible as a free ranging evil spirit; Jan Maxwell makes Kath seem too easy a target for malevolence.

It&#146;s not a popular form, satire, and Alec Baldwin the movie star might not be considered slick enough for the style of Orton&#146;s rancid comedy.No one is safe from his evil eye; everyone laughs uncomfortably.But Baldwin manages to evoke enough suspicion even when his physical presence recalls the sly American mountain climber in The Edge.Indeed, his success as a movie star almost undermines his return to theater.But unfairly. It seems every big actor discovers the push-pull of audience responses to their careers on stage versus in film. Baldwin in any case knows his Orton. He played one of the two bank robbers in Orton&#146;s Loot (1965), that prize winning black comedy which satirized the Catholic Church, attitudes about death, and pretty well every civic institution guarded by a police force. The play won Joe Orton’s reputation as a British comic playwright of savage power, while Baldwin&#146;s success with Loot plainly advanced his own facility playing dark comedy.

(9704)
$2.84 (as of January 24, 2021 - More infoProduct prices and availability are accurate as of the date/time indicated and are subject to change. Any price and availability information displayed on [relevant Amazon Site(s), as applicable] at the time of purchase will apply to the purchase of this product.)

(22314)
$17.70 (as of January 24, 2021 - More infoProduct prices and availability are accurate as of the date/time indicated and are subject to change. Any price and availability information displayed on [relevant Amazon Site(s), as applicable] at the time of purchase will apply to the purchase of this product.)

(7874)
$6.99 (as of January 24, 2021 - More infoProduct prices and availability are accurate as of the date/time indicated and are subject to change. Any price and availability information displayed on [relevant Amazon Site(s), as applicable] at the time of purchase will apply to the purchase of this product.)
related posts