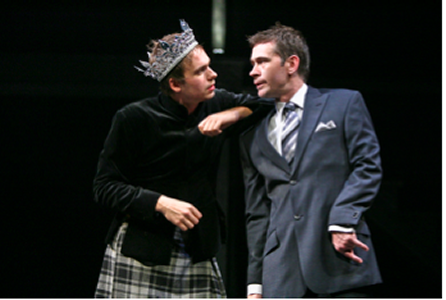 You will love it or you will hate it.  I cannot predict how Equivocation, will strike you, but you will not leave the Geffen Playhouse without an opinion.  That is good, no?  Personally, I think so.

Written during the Bush administration, the story is based on the story that William Shakespeare and the Globe Theatre group are being ordered to write and produce a play for the vain, silly young king James based on his own autobiography.  Central to the autobiography is the King’s good fortune in accidentally intercepting a letter which tipped him off to the fact that Parliament, with the king in attendance, would be blown up at a specific time.  The building was cleared, guards found the barrels of gunpowder — hence it is commonly known as the Gunpowder Plot — below, and disaster was averted.   Guy Fawkes, amongst others, was found guilty and hung , and the popular belief was that witches and devils were involved and that it was a Catholic plot.  It is said that the Gunpowder Plot was the partial inspiration for Macbeth.

The king’s right hand man, (played by Connor Trinneer) and really the brains of the royal operation, will broach no criticism of the silly king’s regime in the Globe’s final product.  In case you have not decoded the message that there is a parallel between Dick Cheney and the gimpy minister who confronts the Bard.  The Gunpowder Plot is King James’ 9/11.  His right hand man has the mission of making certain history will remember it.  Shakespeare is a playwright whom he thinks will not be forgotten.

By this time, if you were not an English major, you may be feeling some anxiety.  How much do I have to know of Shakespeare?  Of the Elizabethan era?  Can I just show up at the Geffen and enjoy the play without taking a final exam first?  Truth be told, those thoughts went through my mind too.  When two theatre acquaintances of mine offered to give me a crash course, I was sorely tempted.  Cole Porter’s lyric, “Brush up on your Shakespeare and they’ll all kowtow ,” kept running through my mind.  I stopped myself.  Should one have to go through all that background study to enjoy what is supposed to be an evening of entertainment?  Either out of loyalty to my readers, or laziness, I decided to stick to my usual standard:  entertainment has to be able to stand up on its own; no homework should be required.  I think Equivocation does stand up on its own.  Now, do not get me wrong.  If you have that background it can only enhance the experience, but you should not be intimidated and stay home just because you do not.  And, if you do not have the background, Equivocation may nudge you to Google after seeing it to follow up on a few of the references.

The stark, but versatile stage and modern dress helped make clear playwright Bill Cain’s point that for artists of any era there is often a thin line they must trod to be heard or seen: the constant tug of war between being cutting edge and putting bread on the table.  Around 1600, the Jesuits were said to have established the “Doctrine of Equivocation” (otherwise known as the “Doctrine of Mental Reservation”).  It was a way to tell the literal truth, but still bury the deeper meaning.  Double entendre, of which Shakespeare is a master, was an important means to this end.  The Protestants called these equivocations lies.

Cain’s play ranges widely.  There is the bard’s practical nature, cranking out works to earn a living and to keep the doors of the Globe open,  himself a master of equivocation and double entendre.   The troupe includes young firebrands who want to reveal all and massive egos that have trouble with this communal style endeavor.  The one problem is that it ranges too widely.  Its operatic length, 2 hours and 45 minutes, includes too many themes and would benefit from tightening.  One character, in particular, struck me as superfluous:  Judith, Shakespeare’s daughter, to whom he paid little attention.  There were nice modern woman sensibilities expressed, and Troian Bellisario added a winsome bit of femininity to the otherwise male stage, but her story was superfluous to the arc of the story.  Cutting it out would bleed little away and help tighten the plot.

All in all, my verdict is do not be intimidated.  Equivocation is both meaty and entertaining, if you let it be.  If you were not an English major and it really bugs you to hear snippets of Shakespeare that seem familiar, but you can not quite recall why, well, then maybe you would prefer to go out to dinner.