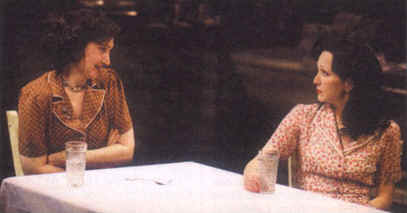 Everett Beekin is a strange play, not easy to classify, impossible to pin down. At first it seems to be a pleasant enough Jewish family comedy set in the late 1940s on New York’s Lower East Side, with a few stock characters and some snappy dialogue and funny lines. But a third of the way into the first act it becomes clear that the play is more than that; what, exactly, remains a teasing mystery until and beyond the final slow fade to black.

One thing is clear-the ambiguity is planned by a skillful, canny playwright. Greenberg (he wrote the adaptation of Strindberg’s Dance of Death that is now on Broadway) has created a powerful, emotionally charged play that is part family comedy, part family tragedy, part mystery play, even a kind of ghost story. It is about the memories we all have that are not recollections of people and events that actually existed, but creations of our imaginations and deep longings-personal and family myths that help make us fully human.

Marcia Jean Kurtz plays Ma, deftly skirting the edges of the stereotypical Jewish mother. Robin Bartlett is Sophie, a skillful rendering of the pragmatic woman who knows beyond doubt that marriage means the husband going to work, and the wife staying home cooking and cleaning, and forget about romance. Bebe Neuwirth is brilliant as the romantic, starry-eyed sister married to a man who can’t make it to family dinners because he’s deep into therapy. Hidden in a back bedroom is Miri, the sister who gets lots of "summer colds" that look more like the last stages of cancer.

Act II is half a century later. Neuwirth now plays Anna’s younger daughter, and Robin Bartlett is Anna’s older daughter. Not only is it 50 years later, it’s also a whole continent and a complete lifestyle distant from the Lower East Side. Here they are in upscale Orange County in the late 90s and the characters are pushed up against the Pacific Ocean with much of the life squeezed out of them by the Southern California world and their own folly.

Jeff Allin, who portrayed a character reminiscent of the Gentleman Caller in The Glass Menagerie in Act I, now plays a pathetically empty boy/man on the verge of marriage, a character with a handsome Southern Cal exterior and not much inside but an intense longing to be somebody else. He wants to learn, but can’t even get the questions quite right. Out of the blue, he asks if Rumania and Romania are the same place, as if with that piece of the puzzle he can move on to wisdom. Allin’s portrayal of this sad, anxious young man is deeply moving.

Director Evan Yionoulis seems perfectly in sync with the subtleties and mysteries of Greenberg’s play. The two settings, designed by Christopher Barreca, provide a delicious contrast between the tenement kitchen and the beach in front of an Orange County multi-million dollar mansion. The one is scruffy and full of the detritus of life, the other is slick, smooth, burnished and all but empty.

Everett Beekin shines with unpredictablility. Even as the last act ends, there are more questions than answers–what is real, what isn’t; how reliable is memory, especially when it comes to family; how, in a world that is overstuffed do we remain pure; and how, in a world that is empty do we become whole. Such questions and the ambiguity of the answers are exactly what makes theatre exhilarating.