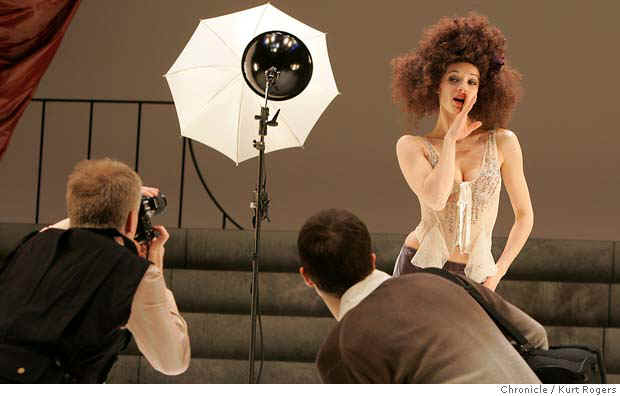 The French, indeed, they are a funny race but nowhere as funny as in Charles Mee&#146;s latest, Fetes de la Nuit. A vaudevillian satire on all things Gallic, Mee&#146;s little bon bon arrived at Berkeley Rep in its world premiere just in time for Valentine&#146;s Day. Mee, who just loves to write about love (Big Love, True Love, First Love) has stirred up a fast moving, racy, raunchy confection that may offend some, annoy a few and surely make everybody else roll in the aisles.

Fetes has no plot, although a few characters come back in scene after scene. It is a series of fast moving sketches, each announced on a screen, much as an old vaudeville show would have a pretty girl come out and change the card on an easel to herald the next performer. Some of the vignettes have a simple title like &#147;Gauloise,&#148; in which each of the characters strolls onto the stage, puffing silently on a cigarette. Believe it or not, under master Mee collaborator Les Waters&#146; direction, this is hysterically funny. Another is &#147;The Existential Accordionist,&#148; in which Bruce MacKenzie, having bored everyone at the dinner table into flight with a description straight out of Sartre&#146;s Nausea picks up the squeeze box to perform his feelings. He will bore everyone several times again before the final curtain.

Another running joke has Lorri Holt&#146;s distraught lesbian pursuing Michi Barall as Sumiko, the lover who got away and, with a fine French ennui, couldn&#146;t care less. Bay Area favorites James Carpenter and Danny Scheie also are on hand &#150; the former as a chef who smokes as he describes and prepares the food at a bistro and the best looking thing on the runway in the send-up of the French fashion show &#150; and Scheie as a go-between in a love scene on a park bench and a pugnacious street thug, among other incarnations. Also outstanding is Jeffrey Lynn McCann&#146;s break-dancing.

There is a French film with the credits running longer than the action and one sketch that defies the description &#147;gross,&#148; based on an actual historical event. In the late nineteenth century, a young man, Joseph Pujol, discovered that he had an unusual skill. Under the name of Le Petomane, Pujol performed to great acclaim at the famed Moulin Rouge before opening his own club. Le Petomane means &#147;the fartist&#148; and McKenzie portrays him with great fartistry.

The phony French accents of the performers are part of the joke too, as are Christal Weatherly&#146;s costumes, especially for the two big production numbers, the fashion opening and the finale, a sendup of the Folies Bergere. Throughout, there’s an excess of emotion and toujours l&#146;amour: love between the sexes, within the same sex and for the sake of sex itself. And, amid the hilarity, there are some kernels of wisdom. At one point someone says, &#147;In love we come to know what it is to be human&#148; and one would guess that is the raison d&#146;etre of this playwright&#146;s art.