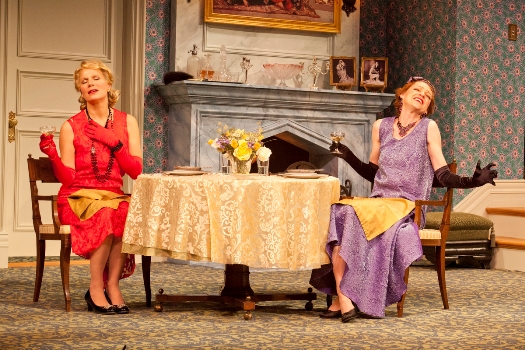 “Fallen Angels,” written by Noel Coward in 1925, is something of a theatrical Thanksgiving Day Parade balloon— entertaining, feel-good, funny, and, of course, lighter than air. (Not that there’s anything wrong with that).

But it depends on the skills of the cast and the director to keep a play like this aloft and, fortunately, the six actors and director Art Manke provide plenty of helium to do just that.

Julia Sterroll (Pamela J. Gray) and Jane Banbury (Katie MacNichol) are a pair of dotty Londoners – let’s say, 40-ish – married to the sort of stuffy, priggish English males Coward enjoyed skewering. The women, long-time friends, have shared interests – a fondness for alcohol and, back in their pre-marital days, being bedded by the same raffish Frenchman, Maurice Duclos (Elijah Alexander; no relation to this reviewer).

By the sheerest coincidence, they discover that Maurice is coming into town, just as their husbands, Fred Sterroll (Mike Ryan) and Willy Banbury (Loren Lester), are leaving town for a golf weekend. And, yes, you guessed it: the plot thickens as more champagne is downed, dormant female libidos are reawakened and jealous rivalries resurface.

I have deliberately saved the sixth actor, Saunders (Mary-Pat Green), for last because she adds so much to the fun of “Angels.” She is the Sterroll’s new maid, quick to answer the dining room buzzer summoning her from the scullery and quicker still to apply a sharp pin to the pretentious conceits of her employers and their friends. She’s also fluent in French, a pretty good pianist and singer, a deft mixologist (bartender), a world traveler and a slyboots just sly enough to deflate her “betters” short of getting sacked.

Although not familiar with all of Coward’s work, I sense that he preferred the rapier of wit to the broadsword of slapstick in his plays. But knock-about is the dynamic when Julia and Jane have too much to drink at brunch in Julia’s flat and carom off each other, the furniture, the telephone, the piano and wind up sprawled on the rug. After five years of marriage, Julia observes, the two are “both ripe for a lapse.” “No,” Jane immediately replies, “a relapse.”

Of course, the two husbands return unexpectedly early, almost simultaneously with Maurice, and revelations are revealed, confessions confessed and realities resolved in a whizz-bang ending.

Credit director Manke for the fast, funny pace; David K. Mickelson and Judy Lewin for the nailed-it costumes and hair/make-up, respectively, and Tom Buderwitz for the classy set.

Although it’s easy to find “Fallen Angels” a bit frothy by today’s standards, one has to admire Coward’s uncowardly treatment of pre-marital sex (and the post-marital urge for another “go”), back in the 1920s. Indeed, while it was the era of bathtub gin, the Flapper and the removable back seat of cars (a convenient make-do bed for many couples, unmarried, married or married to others), extra-marital sex was still very much a taboo in England and most of the United States. Despite critics savaging the play, church leaders’ condemnations and expressions of shock by play-goers, you know what? Everyone somehow survived and a good time was had by all.