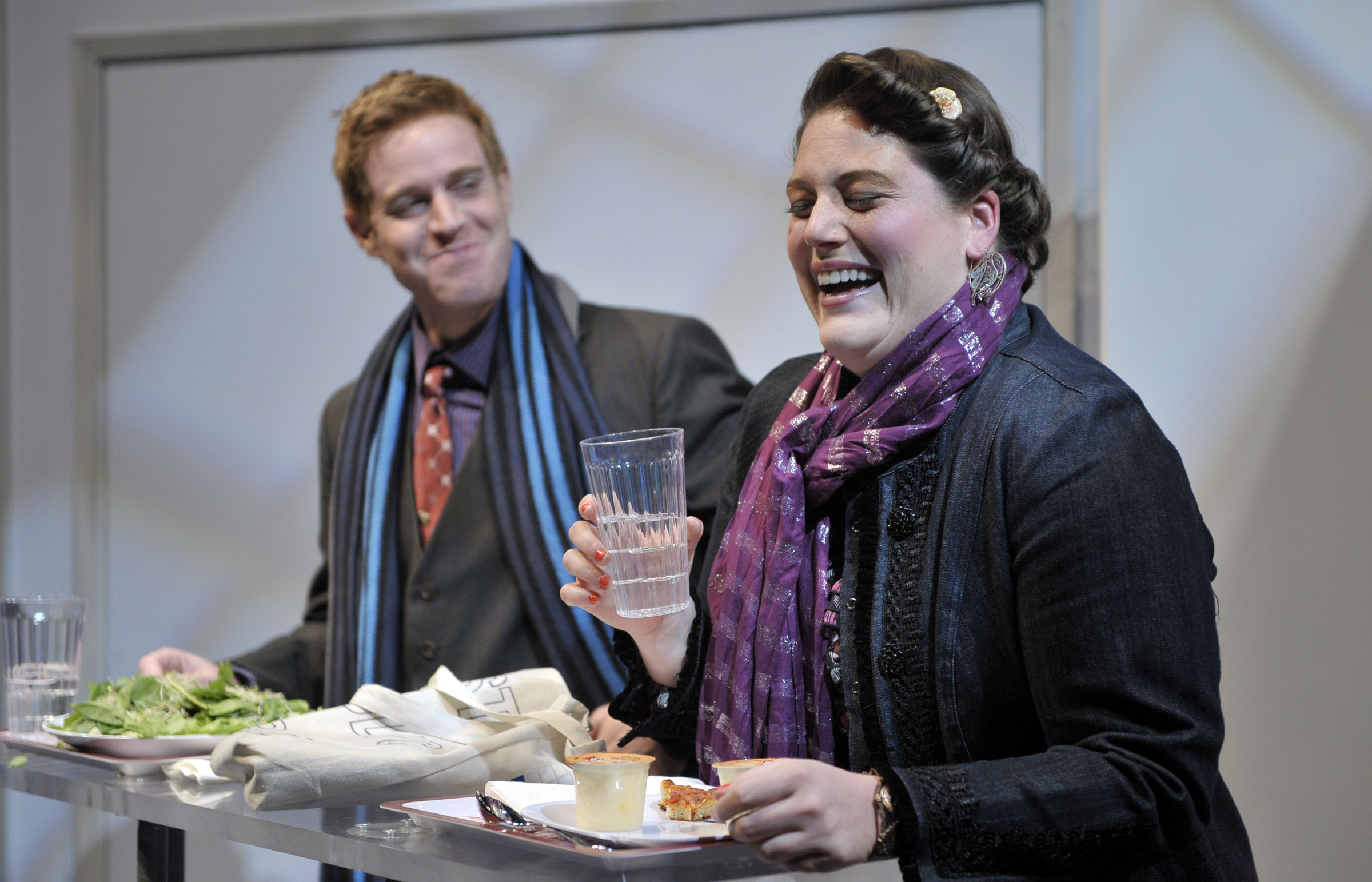 Don’t let the name put you off. Neil LaBute’s (“reasons to be pretty”) “Fat Pig” is a lovely little play about a rather important little issue. Something of a cause celebre’ when it opened in New York, it is one more example of the prolific playwright/provocateur’s in-your-face style. Aurora Theatre in Berkeley does it to perfection with a right-on cast directed by Barbara Damashek (“Quilters” and a lot more).

Tom (Jud Williford) is your ordinary guy, maybe a little better looking than most but ordinary just the same. One day, a casual meeting at a lunch counter brings him together with a girl. She is nice, funny and smart. She even loves old war movies and he finds himself attracted to her. Only problem is, Helen (Liliane Klein) is more than a little overweight. She really likes food (and many of the scenes show her wolfing it down). Tom asks her out anyway and before you know it he is head-over-heels in love. The feeling is mutual.

But, no man is an island and Tom’s colleagues are curious about his new flame. Particularly the glib, superficial Carter ((the very good Peter Ruocco), who casually stalks his friend until he finds him at a favorite restaurant with Helen, who Tom tries to pass off as a client from Chicago. Then there’s Jeannie from Accounting (Alexandra Creighton), Tom’s old girlfriend who can’t fathom why he has dumped her. Between the two of them the co-workers figure it out and, when Carter snatches a picture of Helen from Tom’s wallet and posts it on the office e-mail we have something of a situation. Meanwhile, back in the bedroom, Helen wonders why she and Tom never socialize with their friends. He says he wants to keep her to himself. She has looked in the mirror and guesses differently.

Helen, a librarian, tends to read biography. “Real people interest me,” she says. “Fiction is for the faint of heart.” What LaBute has set up here is a dichotomy between fiction and reality; between surface appearance and what lies beneath. Tom really likes Helen. She makes him happy, in contrast to the string of vapid girlfriends who preceded her. But, to put it bluntly, he is ashamed to be seen with her in public. Helen, who has grown comfortable with who she is over the years, suddenly feels insecure. Klein gives an endearing performance. You want to know and be friends with this girl. Especially after Jeannie unleashes the full fury of a woman scorned, you want to congratulate Tom on his good luck and good sense.

But Tom is confused (and Williford does confusion very well). His choice boils down to a meaningful relationship with a nice person whom he really cares about and “keeping up appearances”. But nice is not a value in Tom’s world. As Carter puts it: “Sometimes we sprinkle a little bit of nice on top of it but that’s just about all.” This from a guy who admits to publicly berating his own mother because of her weight back in high school. In fact, Carter and Jeannie – and sometimes the otherwise-kindly Tom, himself – aren’t all that far from high school or grade school, that time when the ability to be cruel first surfaces as a form of power over others. Never mind that these guys are living and working the “cool” life on Mikiko Uesugi’s chic unit set that goes easily from office to restaurant to beach. Never mind that they are old enough to know that appearances are deceptive and it’s what lies underneath that counts. We’re back in high school here folks and Tom has a choice. Guess what he does. Or better still, go see the play.