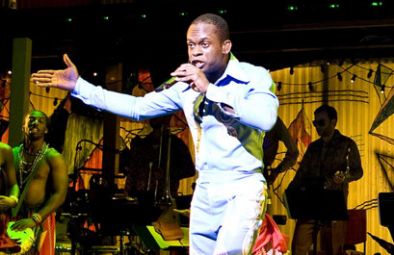 “Fela!” is practically a force of nature. The music is infectious; the dancing is terrific and the energy irresistible. The plot, however, is just about nonexistent. Based on the life of Nigerian singer/songwriter/dissident Fela Anikulopo-Kuti, it presents more of a political tract than a tale. You come away with an overwhelming feeling of gratitude that you do not live in Nigeria. And a sad realization that a whole lot of other people do.

Kuti was born in 1938 into a family of social reformers. His music — dubbed Afro-beat — was a combination of jazz and native Nigerian modes, heavy on the drums. It reached into many places, including many in Europe and the U.S., but none as dangerous as his own underground nightclub in Lagos, The Shrine, which is the setting for this show. His politically charged lyrics and his wide popularity at home earned him some 200 arrests from a totalitarian regime, many beatings and, as dramatically depicted in Act II, a horrific raid on his home that resulted in the rape and torture of his wives (he had seven of them) as well as the death of his beloved mother who was thrown from a second-floor window. None of that stopped him and he continued performing until his death (from AIDS at the age of 58). After that, his beat went on and he became an icon of freedom in Nigeria and beyond.

Conceived by Bill T. Jones, who won the 2009 Tony for best book and choreography and Jim Lewis, who shared the book award, “Fela!” takes place on one night at The Shrine. It is his last performance on his native soil, the title character, played by the amazing Sahr Ngaujah of the Broadway and London cast, announces at the outset. Life in Lagos has become too dangerous. The rest of the tale, told in flashback as well as real time, deals with that decision, and its ultimate reversal. It’s a slim thread on which to hang a tale and what “Fela!” is, really, is a showcase for the music and the dancing, much like its predecessor “Mamma Mia.”

And what a show. Anchored by Ngaujah, who sings, dances, plays the saxophone and narrates, nonstop, it stomps and shimmies and sashays across the stage in a whirl of color and movement. Video projections and changing spotlights (the latter occasionally annoying) flash overhead. There are quiet moments, too, mostly the times that Melanie Marshall, as Fela’s dead mother, is onstage. Marshall, a classically trained soprano who created this role at London’s National Theater, is a powerhouse. Playing the feminist/activist Funmilayo, who inspires, badgers and guides her son even after death (an Act II scene set among the Yoruba gods in the afterlife makes for some pretty stage pictures but, except for her long and beautiful solo, is kind of silly), she lights up the stage as much as those pesky spotlights.

Also excellent are Paulette Ivory as Sandra, the American activist who educates Fela in the tenets of revolution, tap dancer Gelan Lambert and featured players Rasaan-Elijah “Talu” Green and Ismael Kouyate, as well as the tireless and talented ensemble of musicians and dancer/singers. Stage and costume designer is Marina Draghici and Robert Wierzel is responsible for those lights. As for the choreography, don’t even ask. American genius Bill T. Jones — who is fast becoming an icon in his own right — has outdone himself with these dances. They cannot be described. You have to go see them.