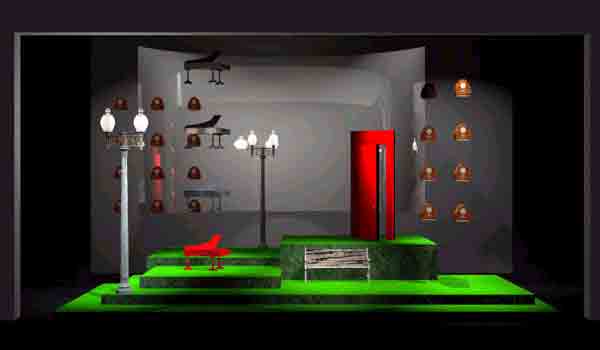 Proposed set by Sean Martin for a production of First Love

Two seventy-plus-year-old ex-communists falling in love at first sight. Not the everyday, crowd pleasing topic. Unlikely to attract the fourteen to twenty something set. Could be a bit off-putting. Put aside such apprehensions for this is a novel, fast paced, hour and a quarter of theater. First Love is Charles L. Mee turning phrases, catching the cadence of an era, exploring love at all ages and in all stages.

The play begins with Harold (Robert Symonds) lying on a park bench in the sun, napping peacefully. Edith (Priscilla Pointer) bursts on the scene bristling at his taking up the entire bench. She is dressed with the fashion sense of a birdwatcher cum bag lady and she spouts off with the delicacy of a sailor after a quick six-pack of beer.She kicks him and fires a verbal barrage. Only after he has shaken himself awake does she notice that even at the far side of seventy she is attacking a handsome man.Her aggressive tone does not abate, but she begins to pepper her talk with references to her very bohemian and exciting past. Her references to poets and party leaders strike a chord ewith him and he offers some of his own. This is Mr. I&#146;m Not Rappaport, meets Ms. I&#146;m Not Rappaport, with no proper daughter to dampen the spirit.

In the play, I&#146;m Not Rappaport, the main character (denying that he is someone called Rappaport) sits on a park bench spewing his anger at whomever passes by. His speech is heavy with old, leftist bromides about the state of the world. His daughter, who has chosen a conventional life in real estate, tries to reach him in this angry reverie, but he finds vitality in the firebrand rhetoric of his youth, the rhetoric that has driven them apart most of their lives.Similarly, in First Love, Edith and Harold are each in a personal web of feelings and recollections, but these recollections involve their bohemian youth. Individually they bemoan the &#147;loss of poetry&#148;and cry, &#147;We lost a lot when we lost communism.&#148; Each is entranced by memories, one cues the other, but, as in all first blushes of love, it is the mirror of the idealized self that beguiles. At times it is a competition as to who knew more big names from the period. Does Ginsburg trump Ferlingetti or is it the other way around? Does it matter? It is the passion of youth that trumps the isolation of old age.For an afternoon they are invigorated and have caught a trickle of their fountain of youth. Their youth was an angry time.

Do not imagine a sentimental stroll. One moment they rip through old songs. He sings a snatch from "I Love You For Sentimental Reasons," she responds with "That Old Black Magic" and they end on "September Song" as a duet. Before it all becomes cloying instead of charming, she lures him back to her basement apartment filled with clothes from younger days as an actress. They have a lovers quarrel or two, and she throws out suggestions that shock him but recall for her her youth, such as "Would you like me to tie you up and dominate you?" Off-stage strains of the "Habanera" from Carmen play and the two of them do a strip tease together with humor, charm and astounding vigor. There is such chemistry between Symonds and Pointer that it comes as no surprise to learn that in real life they are in fact husband and wife, married somewhat late in life, and have frequently acted together. Pointer, in particular, holds nothing back. The performance is so physical and animated it would be a challenge for actors half their ages.

After experiencing less than satisfactory lovemaking, they conjure up a whole relationship that embodies all the disappointments that might befall a long marriage. The mirrored image that was really self-love shatters and it is only then that they ultimately can see each other … somewhat.

Mee&#146;s ear for the leftist-bohemian life is perfect. He, himself, was raised in the fifties, during the McCarthy era, but in a middle class, Midwestern, middle of the road kind of family. An athlete and popular, he was stricken with polio on his first date, never again to walk without crutches. He has written a memoir, A Nearly Normal Life, chronicling his (successful) struggle to participate in as much as he could. Polio has undoubtedly sharpened his powers of observation as his ability to take part in many activities diminished, but his ability to recreate the essence of the radical left from an era that was over before he was an adult, and out of his likely realm of experience, is extraordinary.

First Love, is part of a trilogy that includes Big Love, a reworking of Aeschylus, and True Love, a treatment of Euripides. First Love, pulls instead from the absurdist tradition. Drifting through the performance from time to time, sometimes on a scooter, was Jay Gross, waitress and flower girl, to remind the audience, and the characters, what youth is really like. Pronouncements are made and not responded to. There is confusion between what is real time and what is imagined or remembered. Phrases are turned for the sheer love of language; they are gone before they can be fully deciphered.

Though only an hour and a quarter long, First Love, is so tightly written and so crisply played it is hard to believe it was so brief. It provides an entertaining and thought provoking evening of theater.