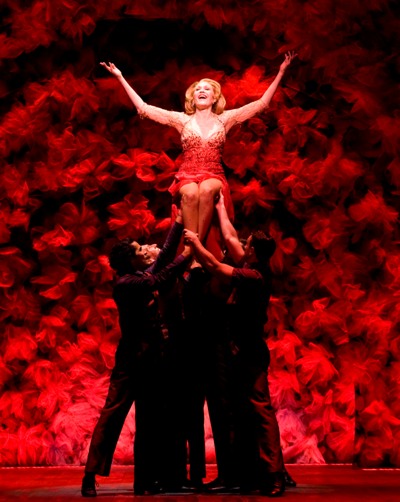 F. Scott Fitzgerald said “there are no second acts in American life.” Though we could debate that, there are still second acts capable of redeeming virtues. Fortunately, director Eric Schaeffer’s over two-and-a-half-hour resurrection of “Follies” is blessed with an inspired Act II.

This send-up of “Follies” is an extravaganza. You are struck by it from the moment you enter the imitation, faded, crushed-velvet draping of the entire Ahmanson Theatre. When I say entire, I mean entire: the ceiling, the walls, the boxes. Did it convert the somewhat refurbished, 1960’s theater into an ersatz, decaying Ziegfeld house? Did all the swag help tell the story of a reunion of aging and aged chorines gathered for one last look before the theater is torn down for a parking lot? Not really, although it must have cost a pretty penny. But the rest of the production is fully realized.

More successful are Greg Barnes’ magnificent Ziegfeldesque costumes worn by the ghosts of the “Beautiful Girls.” One thing, though, about those ghostly babes wandering about the set … they are tottering on very high, 2012-style, mega platform heels. It makes it tough to float down stairs, as a proper ghost should. For the most part, they seem to stand superfluously about, just watching rather than haunting. Think about the last time you were in a trendy restaurant and saw a slender young woman in a skintight mini wobble past on her stilts. Then try to imagine her as a ghost. Be that as it may, we get the idea, as the set delivers the proper sense of decayed grandeur, so let the 28-person orchestra begin.

Over the years “Follies” has been subject to various efforts at editing down its size. Some edits were for economic reasons, some, I suspect, because that first act seems to go on forever. Basically, it is a vehicle to allow aging hoofers of various vintages to show what stuff they had and still might have. Each character has an opportunity for a solo and there are moments when you might wish fewer old babes had come to the party. Fundamentally, it is not an inspired structure from the usually brilliant Stephen Sondheim. Some of the numbers have become classic blockbusters like, “Broadway Baby,” delivered by the aging but sturdy Jayne Houdyshell, who manages to work her way from über grandma to the Broadway baby who still lives inside her. But even a blockbuster can turn pale in the wrong hands. Elaine Paige wearily sighs out “I’m Still Here.” But I keep hearing, “I’m still here, but oy do my feet hurt.”

More importantly, it establishes the stories of two couples, Phyllis and Benjamin Stone — she (Jan Maxwell) still elegant 20 years later, and he (Ron Raines) a handsome and successful lawyer/politician/diplomat. And the Plummers, Sally and Buddy — she (Victoria Clark) Phyllis’ former Follies roommate, giddy and frumpy, he (Danny Burstein) the ever-optimistic traveling salesman. This production began in Washington at the Kennedy Center, where reviews were mixed and some found the first act tedious; it moved to Broadway where it managed to pick up the pace. The trip across country appears to have slowed the production down again. In New York, Bernadette Peters wowed audiences with her portrayal of the chronically unhappy, neurotic Sally. At the Ahmanson, Victoria Clark turns in a serviceable, but uninspired, Sally. It is easy to see why Buddy wanders, but hard to fathom why he still loves her. Peters is a hard act to follow.

And then we get Act II. What a treat. It is hard to imagine a more perfect Phyllis than Jan Maxwell. Yes, she looks impossibly elegant. Yes, she shines above the rest even through Act I, but singing “Could I Leave You,” she delivers Sondheim at his best musically and lyrically and sets the pace for the remainder of the production. All the built-up anger of her 20-year, arid marriage to self centered Ben spills out into exquisitely honed rage. The rest of the act retains this energy.

Derek McLane’s stage magically transforms into a triumph of pink excess from the good old days, “Loveland.” The ghosts come to life, as does the choreography, I suspect because most of the dancers are wearing dance shoes, not stilts, so they can move. The young Ben, Sally, Phyllis and Buddy perform two numbers that make the naïveté and empty dreams of their youth palpable. But the best are Burstein’s Buddy singing “The God-Why-Don’t-You-Love-Me Blues” and Maxwell’s contorted “The Story of Lucy and Jessie,” a wish that two characters as different as Phyllis and Sally were combined into one person who would be perfect.

As a whole, Act I, in addition to seeming too long, left me with a level of discomfort along the lines of happening upon one’s parents having sex. Nice to know they still care, but makes you squirm to watch, and perhaps that is the point. Sondheim always has a core of truth. In “Follies” one has to face how foolish we all are when we are young; and how foolish we look when we are old and are still trying to look young. Reunions viewed from the outside can be uncomfortable things. Act II does not lose the essential message, but comes to life as a Sondheim gem to which this cast gives its all.