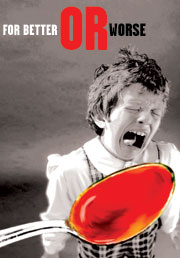 For Better or Worse carries the seed of judgment right in the title. Frankly, it could be better. An adaptation of two George Feydeau comedies by Geoff Hoyle, who also takes the male lead, it chronicles the absurdities of married life as seen through the squabbles of a Parisian manufacturer of chamber pots and his nagging, self-centered wife, over-acted by Sharon Lockwood.

Both Hoyle and Lockwood are popular Bay Area performers, the former almost an icon at Berkeley Rep, and, in the hands of less expert exponents, For Better could have been a whole lot worse. Nevertheless, this kind of comedy &#150; heavy on literal potty humor with the protagonist&#146;s product being worn as a helmet in the first act and flung around the stage in the second &#150; might well have been left in the Belle Epoque, from whence it originated.

Far more enjoyable are a prelude and entr&#146;acte in which Hoyle, posing as a simpering expert from a nonexistent university, attempts to educate the audience on the niceties of Feydeau farce. In the prelude, Barrington Regent begins with the usual shtick about turning off your cell phones and segues to a hilarious send-up of theatrical sponsorship in general (and Berkeley Rep in particular). At the end of the first act the same character does a thing on the famed Feydeau &#147;door slam&#148; with the aid of some audience conscripts who, on opening night, were so adept one wonders if they were ringers.

It&#146;s the filling of the sandwich that is the problem. In Act I, Lockwood lumbers around the stage as a highly pregnant woman about to give birth while Hoyle, her husband, simply wants his dinner, which, of course, is spaghetti, endlessly stuffed into and hanging out of his mouth. Amy Resnick is the pert chambermaid and Lynda Ferguson the overbearing mother-in-law called in to the crisis.

"Eight years and 21 chambermaids later&#148; we are in Act II, dealing with the child&#146;s constipation problem. Daddy is trying to swing a deal to sell his chamber pots to the French army. Mommy, strident in her bathrobe and curlers, is trying to force a laxative down the kid&#146;s throat. Guests are arriving for lunch and the audience is ready to go home. Despite dropped pants and duels, cheating wives (Ferguson again) and Spanish lovers (Rudy Guerrero doing a great Hank Azaria), this act falls almost as flat as the first.

A &#147;world premiere&#148; co-production with the Arizona Theatre Company, directed by its artistic director David Ira Goldstein, the show boasts a wonderful fin de siecle set by Kent Dorsey and costumes by David Kay Mickelson. But, in spite of the talent and resources lavished on this effort, still no cigar.