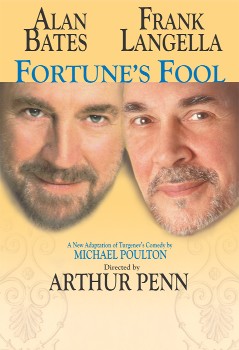 In Act II of Chekhov’s The Sea Gull, the infatuated young Nina gushes to the attractive visiting writer, Trigorin, about how exalting it must be to be a great artist. He bemusedly replies that yes, he knows that his work is "charming and clever," but not much more: "And so it will be to my dying day: . . when I die my friends will walk by my grave and say: `Here lies Trigorin; a good writer, but Turgenev was better.’" ThusChekhov pays homage to one of his great predecessors–the first Russian writer to receive European renown–whose reputation today in non-Russian culture is essentially based on two works: the prescient novel Fathers and Sons and the play A Month in the Country. Chekhov’s humble indebtedness reveals the truism that great artists do not spring like Athena from the head of Zeus; they usually emerge out of an historical abundance of artistic energy. To really understand Chekhov requires some awareness of the hardy dramatic tradition that preceded him in the plays of Ostrovsky, Gogol, and Turgenev.

How fortunate then that Broadway now boasts a play by Turgenev written a half century before The Sea Gull that clearly demonstrates the solid dramatic tradition upon which Chekhov built. And–wonder of wonders!–it is a little-known, almost lost work which merits inclusion in the top-rank of Russian drama.

Mike Poulton has built a reputation in British theatre as an adapter of classic texts (such as the York Mysteries, The Dance of Death, Uncle Vanya, and The Three Sisters) for contemporary performance, largely for the major subsidized companies. Moreover, he is a Turgenev obsessive who found himself a few years ago in possession of an early work by the master titled in Russian The Parasite. Under the new title, Fortune’s Fool, Poulton’s adaptation debuted at the Chichester Festival in England in 1996 with Alan Bates in the central role. The British reviews indicate a very flawed production "undecided between satire and naturalism." Obviously, Bates felt the play deserved a better chance, and after his success last year in New York in The Unexpected Man, convinced his American producers to give Fortune’s Fool another go. After a try-out at the Stamford, Connecticut Center for the Arts, it has migrated to Broadway where it is currently receiving an absolutely first-rate production in the experienced hands of director Arthur Penn. Nothing remains of the original British production save the estimable Bates.

The story: Olga Petrovna, a newly-married young woman returns from St. Petersburg with her ambitious husband to the rich country estate complete with serfs and servants that she has inherited but has not visited since she was a child (an estate very much like the one on which Turgenev himself was reared). Living in a corner of the estate is an impoverished, threadbare gentleman, Vassily Semyonitch Kuzovkin, who had been taken in thirty years ago as a kind of court jester, the amusing butt of jokes, by the girl’s imperious father. Kuzovkin is terrified that he will be dispossessed, but at first his fears are allayed by the girl’s warm greeting of recognition. Then things go awry. At dinner he is plied with drink by Flegont Alexandrovitch Tropatchov, a neighboring nobleman of consummate pretension and boorishness who has, in effect, invited himself to the repast. Goaded into recounting the convoluted history of his economic dispossession and his subsequent unending legal struggle for compensatory redress, Kuzovkin spins out of control, releases his repressions, calls the increasingly offensive Tropatchov "an infamous, fatuous fop," and, most destructively, lets fall from his mental closet the biggest skeleton of all, which concerns Olga’s true paternity. The play’s last act traces with irony and final ambiguity the repercussions of this revelation for all the major characters.

This is hardly the summary of a farce. But despite the genuine emotions of humiliation, recrimination, and confession, as well as love and duty on display, the play is more often than not hilariously funny, no scene more so than Kuzovkin’s increasingly drunken and manic recounting of his never-ending case which resembles Lucky’s crazy lurch into unintelligibility in his monologue in Waiting for Godot. The masterful uniting of pain and hilarity recalls Chekhov’s complaint that Stanislavski was turning his comedies into tragedies. A half century before The Sea Gull, here is a perfect example of a play which effortlessly and honestly conflates the comic and the tragic, anticipating a post-Absurdist tragi-comic world.

Arthur Penn, back on Broadway for the first time in twenty years, has wisely recognized that the way to interpret this complex play is not to impose a "classic" style which exaggerates for tragic or comic effect, but to play for the truth of character and action. Fortune’s Fool is engrossing at a level rarely achieved in classic revivals. The performers–the servants no less than the principals–are able to root their characters in Stanislavskian truth because, as in Chekhov, Turgenev individualizes all of them. Penn draws these characterizations from the actors playing servants as well as from the upperclass principals: George Morfogen as Kuzovkin’s one friend, Ivanov; Enid Graham and Benedick Bates as Olga Petrovna and her husband, Paul. All the actors, of course, have an eye for the elements of absurdity and foolishness in their characters which enable comedy, none more so than the play’s stars, Bates as Kuzovkin and Frank Langella as Tropatchov.

On first appearance, Langella as the obnoxious Tropatchov seems, in his mannered oiliness, to be playing over the top. But it becomes clear that it is the character, not the actor, who is creating a persona that is over the top, a character more complex than a stereotyped villain. He may represent on one level Turgenev’s satiric disdain for the useless gentry, but he is also shrewd and controlling and in firm possession of confident self-esteem–in short, everything that Kuzovkin is not. Langella offers an assured and commanding performance, the perfect foil on all fronts for Alan Bates’ remarkable portrayal of a character at once classic schlemiel and determined truth-teller. The drunken monologue fuelled by Tropatchov’s constantly refilling his glass (with Olga’s booze) is an absolute tour de force, a wildly hilarious drunk scene, even as its genuine pain is moving. Bates displays both the emotional truth and a technical mastery that is astonishing. It’s a great performance worthy of a great play.