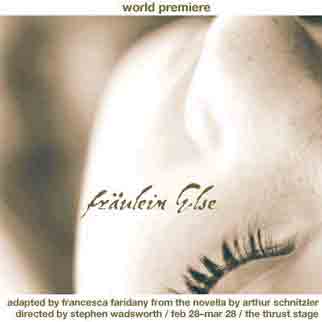 Arthur Schnitzler was a physician who became a prolific writer, turning out plays, stories, novels and novellas over more than three decades spanning the turn of the 20th century. A contemporary of Freud’s and deeply influenced by Freud’s work, Schnitzler was intrigued with the conscious and unconscious mind, with psychopathology, and, perhaps most consistently, with sexuality. He was a participant in a golden age of Viennese creativity along with contemporaries like Rilke, Schoenberg, Mahler, Strauss, Hofmannsthal, Klimt, Schiele, and Kokoschka.

But what polite program notes do not address is that Schnitzler himself had a series of mistresses during his life and was a regular patron of prostitutes. At least one biographer has suggested repressed homosexual tendencies. Certainly, a preoccupation with sex is evident. To the good, at least some of that drive was sublimated into his writing.

Francesca Faridany, an accomplished actor, saw in Schnitzler’s Fr�ulein Else (1924) the potential for a tour de force role and so adapted the novella for the stage and now stars in Berkeley Rep’s production. The novella, like Virginia Woolf’s far more ambitious Mrs. Dalloway (1925), is written as a stream-of-consciousness and Faridany has managed extraordinarily well to translate that technique into stage terms. Fr�ulein Else is a young woman on holiday at a resort in the Dolomites in Northern Italy. She is onstage virtually the entire 90 minute length of the play and she talks nonstop, sometimes as if in direct conversation with the audience, sometimes wandering through her own unconscious mind.

Else has a suitor in Vienna, but is sexually inexperienced and repressed, though aware of the patterns of sexual behavior around her at a time when standards for respectable women excluded free expression of sexuality–even in the marriage bed. Husbands thus commonly took on mistresses, often working class women–shop girls, waitresses. Also at the resort are her married cousin, Paul, a gynecologist, and his paramour Cissy. There’s a sexual undercurrent between Paul and Else as well. And there is Herr Von Dorsday, a friend of Else’s father.

The plot pivots on a letter sent by Else’s mother, informing Else that her father is (once again) in dire financial straits; the sum of 30,000 gulden is urgently needed or his arrest is inevitable. Would Else approach Von Dorsday for (yet another) "loan"? (Her father, it seems, is a compulsive gambler, not above embezzling from trust funds to fund his habit.) Else’s meeting with Von Dorsday is the one piece of genuine dialogue in a play that is otherwise a monologue. From that meeting the difficulty of Else’s position is wrought, very much a reflection upon the mores of the time. It leads to a conclusion of growing tension and intensity, effectively realized in the writing and in Faridany’s performance of exceptional emotional transparency.

The monologue form is intrinsically less conducive to compelling drama than works that allow for dialogue, conflict, and interaction amongst characters. Fr�ulein Else is of that more limited form, revealing of just the one character through her words. None of the other characters is more than a foil against whom Else reacts. And as effective as Faridany’s performance is, it is diluted by the virtually nonstop outpouring of words delivered at a constantly near-breathless pace. While her comic moments are undeniably well-delivered, more variation both in tempo and tone of the overall performance would render the poignancy of the conclusion more heart-rending. An occasional silence, an occasional moment of slower reflection would heighten the impact of the growing hysteria which progressively grips her.

The production, designed by Thomas Lynch and lit by Joan Arhelger, uses a scrim with an image of the snowy Mount Cimone dominating the scene with Freudian aptness. Action moves in front of and behind the scrim for various locations at the hotel, providing an easy flow under the graceful economy of Stephen Wadsworth’s direction. Anna Oliver’s costumes are elegantly suitable to the period.