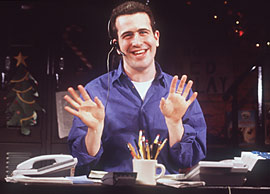 We have this godawful new word in the language: reservationist. (It’s certainly not in my Random House Unabridged.) The word emerged, one supposes, because it is only in recent years that the task of taking restaurant reservations has become its very own specialization. Anthropologists might tell you that exceedingly specialized tasks are indicative of civilizations that are both highly advanced and sufficiently wealthy to allow such a narrowly defined range of productivity – like jade carvers in ancient China, perhaps. Of course, we can still enjoy the products of their artistry.

"Reservationist" was used in the headline of a feature in the San Francisco Chroniclerecently, an odious piece of "how to" journalism offering instruction on how to suck up for a desired table in the city’s "top" restaurants. There was not an iota of irony in that article, mind you – it was serious. One ponders, aside from long-standing concerns over the insipid journalism of the daily press in Baghdad by the Bay, just for whom these people are writing. "Developing a relationship with the reservationist," the article says, "and letting your sincere desire to get a table be known often is rewarded by a call if there is a cancellation." Real life overtakes satire.

Which leads us to the subject at hand, a very fast and funny hour and a quarter of comedy called "Fully Committed" – the term preferred by the restaurant in the play to "booked." One actor plays a reservationist, Sam, in a New York restaurant du jour, as well as all the callers on the telephone angling for a table, the maitre d’hotel, the chef, and assorted other peripheral characters. The clever script, a first outing by Becky Mode, actually manages to create fresh satire where self-satirization has already commanded the roost.

Sam is telephone-ambushed by an 84-year-old customer complaining that she did not get her senior’s discount; Naomi Campbell’s social secretary who wants to bring his own light bulbs to the restaurant in case Ms. Campbell’s beauty might be marred by glare; and wealthy socialite Bonnie VanDevere, who drops Philip Johnson’s name as if it were Jehovah. Sam also deals with his agent (he’s an actor looking for work), a smarmy actor-competitor, and even his own father who wants him home in Indiana for Christmas.

There’s plenty of room for making fun, for the humor of exaggeration, even in this over-the-top milieu of naive tourists, society grande dames, media stars, and wannabes. After a while, in the tightly structured progress of the play, it’s theme transcends the immediate time and place of the restaurant and the craving for the right table, and crystallizes into a metaphor for all the ways that people scheme to get what they want. It is not a pretty picture – but then good satire never is.

The role of Sam is a demanding one, obviously, and, as well, a showcase for a young talent. Ethan Sandler, who has a face of marvelous plasticity, expertly and comfortably moves from one voice to another, from one mini-characterization to another, and, alone on the stage, creates this menagerie of neediness. Underneath, he remains just unspoiled enough, and enormously likable, thereby providing a foil for the surrounding miscreants. It is a bravura performance, the kind that promises stardom.

Director Nicholas Martin (restaged in San Francisco by Daniel Goldstein) finds just the right pacing in a frenetically lively scenario. When Sam aims balls of wadded waste paper at the trash can and misses several times during the evening, it is a sign both of directorial restraint and fidelity to the point of the play that the basket is not scored later on. The director has honored his playwright who doesn’t compromise her acidic observation of urban misbehaviors. Sam may get what he wants in the end, but, if you are paying attention, you won’t admire his route to a happy ending.