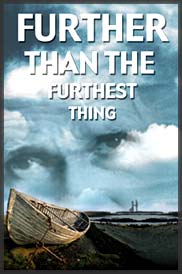 What happened to the people on the island of Tristan de Cunha is fascinating, and Zinnie Harris has used it as a jumping off point to create a moving play that explores issues of identity, sin, redemption, murder, commitment, sex, and love. And it is done with a generous dollop of humor, fascinating characters, and even a few slick conjurer’s tricks thrown in.

The factual story of the island goes like this: centuries ago seven men were shipwrecked on the island, located about equidistant between Cape Town and South America (hence the title of the play). Jump ahead to 1961 when almost all the folks on the island are descended from these seven men and some of the original island women. The world they created is a strange blend of English influence (it is a British possession) and the time-out-of-time strangeness of these long isolated people. Their world is harsh and oddly cozy at the same time. To a stressed-out New Yorker it might seem an ideal place to get away from it all…emphasis on all. Suddenly the picturesque mountain at the top of the island turned into a volcano and lava flows.

The residents were all evacuated to Southampton, England. Some stayed there, some returned later. This much really happened.<> Now Harris’ imagination takes over. There is the struggle to adapt to England, the struggle on the part of some of the islanders to return, the struggle of individuals to learn to forgive themselves and love each other.

And there is the dark secret in the islanders’ pasts which is presented in one of the most starkly moving and horrifying monologues imaginable, delivered by Jenny Sterlin, an actor of great skill, gritty humor, and middle-aged sexiness. Her character is the moving force in the play, the one the others revolve around and react to, and Sterlin’s performance runs the gamut from a caressing palm to a clenched fist.

Peter Gerety plays Mr. Hansen, a man who owns several factories that make jars, cans, and boxes. Containers, he explains, that you could put anything into. These jars are an extended metaphor, brilliantly conceived by Harris: the islanders cannot be crammed into the-to them-very oddly shaped jar of Southampton after a life roaming free on their wave-swept, wild island. Gerety switches with subtlety and authority from a businessman after profit (he shows up on the island, just before the volcano blows, wanting to build a factory to process the local seafood) to a man who comes to love the islanders, if not understand them. He’s also an amateur conjurer, quite deftly turning a penguin egg into a jar into another egg into some coins. If only the islanders could be so easily transformed.

Zinnie Harris’ play has five carefully drawn characters each of whom shine with individuality while seeming to represent a good part of the whole world. It is, at the same time, a very plot-driven play and a character study. The plot is fascinating, the characters mesmerizing. The only conceivable criticism would be that she seems to have included every good idea she had so that the script seems just a bit overstuffed at times….hmm, like an overflowing jar.

Production values are strong. Scott Myers’ music and sound design evoke an imaginary world where the sea is calm and a volcano rips that world open. Costumes by Laura Bauer and Bobby Tilley II depict a wide range of attire from the eccentric garments of the islanders to the bland dress of Southampton. Neil Pepe’s direction, as usual, is sensitive and sure-handed, moving the actors scene-to-scene like a smoothly running clock, and helping his actors reach deep into the hearts and minds of the characters.