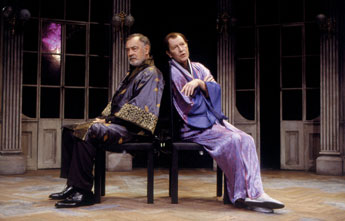 Hilton Edwards and Miche�l MacLiamm�ir were two of the most important figures in twentieth century Irish theatre. Edwards was best known as a producer and director and MacLiamm�ir an actor, although he was also a designer, writer, and director in his own right. In 1928 Edwards and MacLiamm�ir co-founded the Gate Theatre. Their intention was that the venue would stage important works of contemporary European theatre. The co-founders wanted to offer Irish audiences an alternative to the more traditional fare produced at the Abbey Theatre, home of Yeats, Synge, and O&#146;Casey. The Gate was therefore willing to take risks on works by the likes of Ibsen, Chekov, and Zola, and was drawn to unexpected and offbeat readings of classic Shakespeare.

Edwards and MacLiamm�ir also embodied the ideals of the alternative in their choice of lifestyle. They were openly gay in a society which did not decriminalize homosexuality until the 1990s. Though their lives in theatre shielded them from substantial prejudice, Dublin wags were quick to nickname the Gate and the Abbey "Sodom and Begorrah" in recognition of their respective repertoires. MacLiamm�ir was also a champion of Oscar Wilde, another gay Irishman whose work received new and controversial stagings at the Gate, including the first English language production of Salome.

Donald Taylor Black&#146;s recent documentary Dear Boy: The Story of Miche�l MacLiamm�ir explored the extent to which MacLiamm�ir used the theatre as an elaborate mask for his various identities. Born in England to well-to-do parents, he reinvented himself as an Irishman and immersed himself in roleplay to a point at which his very sexuality seemed subsumed by half-truths and camp performances which partly displayed and partly hid who he &#145;really&#146; was.

Frank McGuinness&#146; Gates of Gold works similar imagery through a dramatic story. Because its characters are so clearly inspired by real people, the play runs the risk of triggering too many associations with actuality and awkwardly collapsing into the perception that it is a dramatized documentary. Fortunately, Gates of Gold is a touching, lovingly written story about complex emotional and psychological relationships between vividly drawn individuals. The blend of larger than life theatrics and quieter, more intimate moments of revelation proves to be a perfect blend of form and content.

The story follows the last days of a MacLiamm�ir-like actor/designer named Gabriel (Alan Howard). He is cared for by a no-nonsense nurse, Alma (Donna Dent), who is paid for by Gabriel&#146;s long-suffering lover, Conrad (Richard Johnson). Gabriel&#146;s equally theatrical sister, Kassie (Rosaleen Linehan) drops by from time to time, along with her bitchy gay son, Ryan (James Kennedy). Gabriel, Conrad, and Kassie share an affinity for invention. Their semi-apocryphal stories of life and love inform their understanding of one another. Though Gabriel is angry and dying, he is not above playing the provocateur and drama queen when it suits him, and he is as wont to chide his patient lover as express genuine affection for him.

Alma initially seems to find herself displaced in this world. Her mordant realism, informed by years of caring for the dying and by her own tragic past, is itself peppered with elements of willful self-deception. She develops a new perspective on herself in dealing with these people, most particularly Gabriel. As the story unfolds, the audience is invited to share the subtle confrontation of emotion which transpires.

Gates of Gold is delicately written; the language is fluid and poetic, and the dialogue exchanges are appropriately elliptical but not obscure. The characters relate in believable ways even though the thematic concern with lies and half-truths sometimes clouds the storytelling. McGuinness&#146; personal commitment to this subject is evident, and the play is both moving and thought-provoking.

The Gate&#146;s production has added resonance given its relationship with the venue itself, but Joe Vanek&#146;s set is effective on its own terms. McGuinness&#146; script calls for the simultaneous staging of parallel scenes to portray the interrelationships between two sets of conversations. Vanek&#146;s set neatly divides the space into two rooms which focus attention on the actors, keeping props to a decorative minimum while still suggesting a domestic flamboyance befitting its characters (a huge portrait of the two men decorates one rear wall). Only at the climax does the space between the rooms dissolve, allowing actors to cross from one side to the other without exiting at the rear.

The performances are obviously central here, and director Patrick Mason has brought out a modulated range in each of his actors. Howard balances the inevitable camp excesses of his character with more somber indications of gradual physical decline. Johnson is more understated but equally effective in portraying a man of this age in this kind of relationship. Dent also succeeds in evading cliche in her characterization, although Linehan and Kennedy do not.