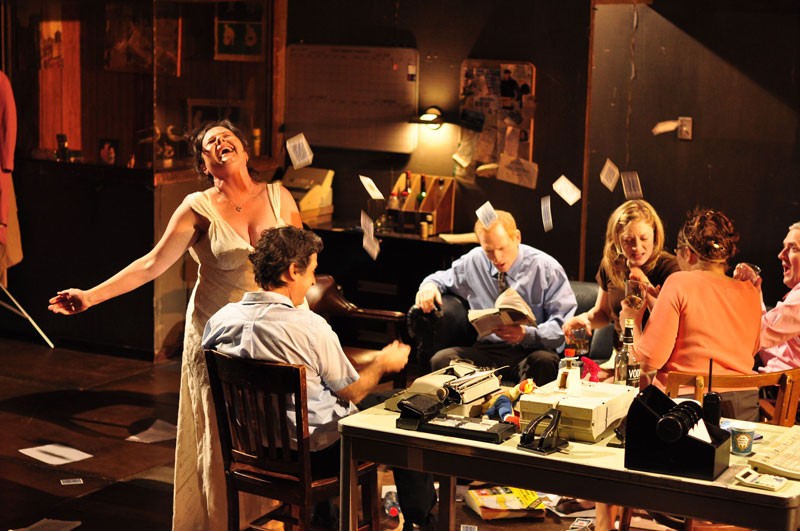 Elevator Repair Service’s 6½-hour show, “Gatz,” is not exactly a stage adaptation of F. Scott Fitzgerald’s “The Great Gatsby” but a performance piece in which Scott Shepherd (one of the great New York actors of the moment) reads the novel in its entirety. The production has been touring internationally for several years—I saw it at Philadelphia’s Live Arts Festival in 2007—but it wasn’t allowed to play New York or Los Angeles because another more traditional page-to-stage regional theater adaptation held the rights to a Broadway production. Finally, all obstacles cleared, and the show opened the fall season at the Public Theater and has been received with justifiable rapture. It’s a seriously great piece of work, wonderfully imagined and staged by ERS director John Collins and his company of actors.

The show takes place in a crappy fake-wood-panelled fluorescent-lit back office full of old furniture and steel shelves sagging with file boxes. Shepherd arrives at his desk and tries to boot up his ancient computer, with no luck. Other office workers arrive and go about their business. To entertain himself while waiting for someone to come fix his computer, he takes out a beat-up copy of “The Great Gatsby” and starts reading it aloud… and doesn’t stop. At first his co-workers indulge him, try to ignore him, look at him weirdly… but eventually they start joining in, speaking certain lines, then taking on the roles of the main characters of the book: Gatsby, Tom and Daisy Buchanan, Jordan Baker, Myrtle Wilson, etc.. Shepherd, of course, is Nick Carraway.

Collins began his career as a director as sound guy for the Wooster Group and Richard Foreman, and his signature style with ERS focuses an enormous amount of energy on the soundtrack. Here it becomes the key theatrical element that transports us to different times and places. (The guy running the sound sits onstage the whole time, as if he were the office security guard or something.) We’re still looking at the office set and a collection of actors playing office workers who are nerdy/schlumpy and anything but the glamorous moneyed Long Islanders of Fitzgerald’s story, but we start seeing scenes from the novel come to life. The chaos of drunken parties on Long Island, the unnerving moments of violence, the tense showdown in a room at the Plaza Hotel. And of course we’re also in the theater watching actors perform. I loved how the production kept all three of those realities afloat. There’s a line in the novel where the narrator says that women used to dip their hands in champagne and run them through Gatsby’s hair. Shepherd stops and looks across the table at Jim Fletcher, the actor playing Gatsby, who’s tall and bald. The audience laughs. Fletcher turns and looks at the audience. An even bigger laugh. They go on.

There’s a kind of theatrical alchemy at work that is a trademark of ERS, a company that has created 14 full-length works since it was founded by Collins in 1991. They like to start with very simple means, not much more than you would find in any low-budget theater company’s rehearsal room, and see how much magic they can spin out of thin air with the basic elements of theater: light, sound, words, and actors. These performers unshowily demonstrate a scrupulously modern Brechtian form of acting—they don’t force you to “believe” anything, they simply attend to their given actions and let your imagination fill in a lot of things you’re not actually seeing with your eyes. The ensemble is excellent, though I especially enjoyed how skillfully Susie Sokol and Gary Wilmes managed to be both plain and colorful as Jordan Baker and Tom Wilson. Shepherd can be a heroic actor (he played Hamlet for the Wooster Group) but here he carefully balances observer and participant, alternately cool and romantic and vulnerable, and thoroughly Midwestern. Seeing it a second time, I found myself especially appreciative of Kate Scelsa, who has very few lines but who maintains the framework of the production as some kind of office manager, always lurking around, stomping back and forth with papers to sign, cleaning up people’s messes, or sitting in her glassed-off booth looking miserable.

For most of the performance, Shepherd is holding the book in his hand and referring to it. But in the last 20 minutes or so, he stops reading and starts speaking the lines from memory. Slowly, throughout the show, the set has been clearing out. The table that was loaded with computers, phones, papers and books has been cleared off, so by the end Shepherd is sitting behind it speaking directly to the audience. (I couldn’t help seeing this image as something of an homage to Spalding Gray.) It felt like nobody in the audience breathed for the last 10 minutes, hanging on the final paragraphs of the book, at the end of a long, beautiful, tragic tale of love, money, and American dreams.