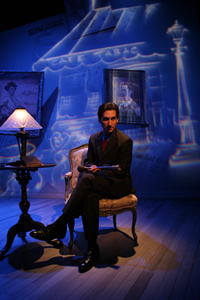 What more can one say about George Gershwin? His music has weathered the tests of time with great ease; his brother’s lyrics, for the most part, have remained fresh; and his death from an undiagnosed brain tumor at age 38 was a tragic loss. Doubtful that there will be any arguments about any of that. Hard not to speculate on what might have followed Rhapsody in Blue and Porgy and Bess, had he lived on, and hard not to believe that whatever else he might have created would also have contained gems.

If you are a Gershwin buff it may be worth a trip to the Geffen Playhouse just to listen to Hershey Felder’s competent performance. It was all very pleasant and Felder, as Gershwin and narrator, gave a concise history of the composer’s short life. He also captured the hubris and humor of the brash young man who wrote everything from pop music to the first American opera, putting jazz into the concert hall as well as into the mainstream. Make no mistake, I like Gershwin, and I like brash young men. I suspect Felder is one himself. They are often responsible for innovation and, like Gershwin, have the wherewithal to ignore critics who would stop change and development. For many, the straightforward portrayal and the generous helpings of music and song will be all that is required.

A problem with George Gershwin Alone, if one expects more than just a pleasant evening, is that it adds little more to what was probably already known by an audience who can sing entire lyrics for as long as the pianist is willing to play. Felder included several bits where Gershwin is puzzling out a phrase, serving to explain – in simple terms – how he did not follow musical conventions by writing, for example, unexpected changes of scale or a descending note where convention would have dictated a rise. He did this sparingly; undoubtedly it was useful for anyone completely unfamiliar with musical structure and not so detailed as to bore someone more knowledgable.

Felder offered a sing-along after his final bow – hence the reference to the house knowing all the lyrics. Almost no one in the audience left. It seemed that most everyone knew most of the lyrics and welcomed the chance to sing. The performance reviewed here had the added treat of a terrific voice from a woman in the balcony named Andrea whom Felder playfully accompanied as he also directed. He claimed she was not a plant and rumor has it that someone like that emerges for almost every performance. Although the audience was responsive throughout, it was clear that the sing-along was the highlight for many.

The writing, the acting and Felder’s musicianship were all competent, but none were a standout on its own. Felder, as himself, is charming and established a true rapport with the audience. Maybe it is a case of “who can ask for anything more?”