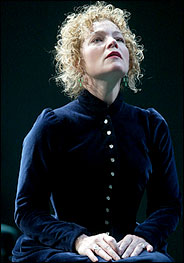 In 1991, Dramaten, the Royal Dramatic Theatre of Sweden, brought to the Brooklyn Academy of Music a version of Ibsen’s A Doll’s House, directed by Ingmar Bergman that was revelatory. It was as though a giant theatrical handduster had swept away all the must and mold that had encrusted most contemporary productions of the great modern master. Bergman’s recuperation moved in opposite theatrical directions: scenically, he rejected traditional drawing-room realism by stripping the play almost bare: a free-standing platform stood in the middle of the stage space like an island in an endless sea; as the action of the play progressed, the actors not in the present scene sat like spectral presences around the platform watching the performance, waiting for the cue to participate, complicitous in Nora’s actions and fate. The specific nineteenth-century milieu was represented by huge two-dimensional fragmentary photographic blowups of vintage domestic scenes that were iconic rather than illusionistic.

With the trappings of realism gone, Bergman then created a stage reality in which–reinforced by ambiguous costumes–past and present merged. The great Swedish ensemble delivered their lines (in their native language) as though the text was contemporary. And yet in no way did the language seem anachronistic. The acting was absolutely convincing and believable. Bergman veteran Erland Josephson (as Dr. Rank) was joined by brilliant (then) newcomer Pernilla Ostergren (now Pernilla August) as Nora. Watching them gave the exhilarating sense of watching a play about recognizable people; it was seeing for the first time a new play by Ibsen our contemporary.

Daniel Fish, the director of the production of Ghosts currently at CSC Repertory Theatre, may or may not have seen Bergman’s great production, but there is no doubt that his esthetic aims are the same. First of all, he has commissioned a new colloquial stageworthy translation by Lanford Wilson which returns the stilted rhetoric of William Archer’s translation to the library. And scenically he also strives for stark simplicity. The initial image seen in a sea of blackness is a huge window streaked by pelting rain, a successful equivalent for the ominous image of the fjords that Ibsen calls for. And Fish clearly worked to get from his actors honest, subdued performances.

He has also, like Bergman, somewhat restructured the text, here by severely cutting the middle acts so that the performance lasts an intermissionless ninety minutes. This causes some difficulty. Brevity is, of course, superior to attenuation, but there is the counter danger of condensation. Ibsen works cumulatively and one tampers with his rhythms at one’s risk. After a full first act this text moves too rapidly to the fire and the denouement.

If this Ghosts lacks the imprint of a director of genius, it is nonetheless a considerable achievement in that it realizes much of its estimable goal of projecting the greatness of one of the most powerful plays ever written. Remember that Ghosts is one of most vilified plays in theatre history, called by British reviewers at its London debut "an open drain," "a loathsome sore unbandaged," "a dirty act done publicly." It was not only the subject of inherited venereal disease that offended, but Ibsen’s broad-fronted assault on bourgeois hypocrisy, smugness and deceit. Mrs. Alving is the anti-Nora; succumbing to the fearful advice of the spineless Manders, she refused to leave her debauched husband, and is–as the play begins– about to open an orphanage to his memory. The most terrible price is paid by her beloved son upon whom her husband’s sins have come to rest.

The spectacle of Oswald’s deterioration–particularly in our age of AIDS and anthrax —still evokes Aristotelian pity and fear. The role is a challenge and an opportunity for an actor of talent. In the current production, Ted Schneider succeeds, on the whole, in sensitively charting Oswald’s descent into dementia. But what can be found wanting in his characterization applies as well to an essentially excellent cast: good, honest work here, but not quite of the highest order. The actors never achieve the spirit of true ensemble displayed by the actors of Dramaten. There is something missing in each characterization. David Patrick Kelly’s Engstrand and Lisa Demont’s Regina catch the cunning but lack the ferocity of that unpleasant pair. Daniel Gerroll’s well modulated Manders is the weakest link; the actor seems self-consciously aware of his moralistic hypocrisy. He never credits Manders’ capacity for self-deception.

The strongest performance, appropriately, is given by Amy Irving as a sensitive, believable Helen Alving. If there is a flaw in her essentially impressive and moving performance it is that she fails to find the element of timorousness in her character, the element that made her choose to stay in a broken, loathsome marriage. In her conversations with Manders she advances progressive ideas that make her sound like Nora, but Ibsen’s point is that her tragedy is precisely that she lacked Nora’s courage to pursue a radically unpopular path.