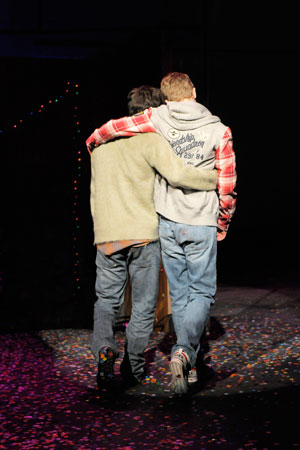 Ah youth! Here we are again folks with another rock musical about coming of age. Having achieved phenomenal success with “Passing Strange” and “American Idiot,” Berkeley Rep is stepping out with “Girlfriend,” a new piece loosely based on the album of the same name by Matthew Sweet. Imagine that the two aforementioned shows, perhaps with a touch of “Spring Awakening,” meet up on the road to “Brokeback Mountain” and you’ve got the picture. Rebellious, misunderstood teens, stuck in the limbo between high school graduation and whatever comes next, find their only outlet in these songs. And each other. The plot is boy-meets-boy, boy-gets-boy, boy-loses-boy only to meet up again at an improbable, somewhat contrived ending.

But it’s very sweet (no pun intended) and Sweet’s music, delivered by a dynamite all-girl combo located stage rear and the two talented principals is easy to listen to. Will (an adorably nerdy Ryder Bach) knows he is gay. So do all of his classmates and, in 1990’s Nebraska that ain’t good. Imagine his surprise when, on the last day of school, he gets a call from the popular, good-looking sports star Mike (Jason Hite who looks like a popular, good-looking sports star). Mike says he just wants to hang out while his imaginary “Girlfriend” is out of town. So they go to the drive-in. All summer. Same movie, a sci-fi superhero fantasy called “Evangeline” (lead-in to another Sweet song), Now Mike is just as gay as Will but his closet is tightly shut. Their conversations are an exercise in banality with enough silences to do credit to “Godot.” It’s all pretty funny.

As the summer progresses and the friendship grows the boys work their way through the Sweet songbook and Mike’s defenses begin to crack open. Will, who always thought that his life was a musical, comes into his own. Finally, the first kiss. Then, on the night before Mike’s departure for college, something more. Shortly thereafter, as is prone to happen in musicals – and life – things get complicated.

Joe Goode’s minimalist choreography is just right, as is David Zinn’s set – two bedrooms and a couch that serves as Mike’s car and, eventually, a pull-out bed. Les Waters has directed with a sensitive touch. But the best thing about this show is Sweet’s music and the way it is enthusiastically delivered by the girls in the band (pun intended): Julie Wolf, Shelley Doty, Jean duSablon and ieela Grant. They’re loud but terrific. Sweet devotees will have a blast.