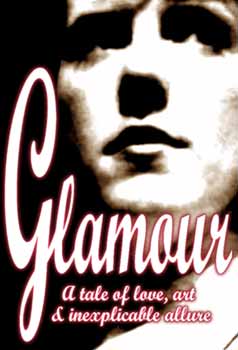 Somewhere in the true story of poet-scholar-novelist Robert Graves and his lover Laura Riding, also a respected poet, there may indeed be buried a dramatic and compelling play, but Glamour by John O’Keefe does not unearth it. Many of the elements of drama are there in the set-up. It is 1939, Czechoslovakia has just fallen to the Nazis, and Graves and Riding have escaped from their home in Spain as Franco gains power. They flee to the United States with a single suitcase between them and are taken in by Schuyler Jackson and his wife Kit. Jackson is a part-time writer for Time Magazine who has recently written a review of one of Graves’ books.

Graves, at this point, was in some ways a ruined man. His experiences of the trench warfare of World War I left him shattered, obsessively mumbling in his waking hours about rats and putrefying corpses in the trenches, and screaming long into the night. Riding, on the other hand, had a reputation as something of a witch, a charismatic woman with the supposed powers to cast spells and weave enchantments. It is this archaic definition of glamour (a magic spell, enchantment) on which the playwright focuses. Lengthy program notes set all this up so that an audience is bound to be disappointed at the Graves and Riding that materialize on stage.

The play is episodic, lacking a strong through-line. There’s too much windy talk and there are too many scenes ending at inappropriate moments, It’s like a handful of dull beige/gray beads with nothing to string them together. It is one of those plays where coffee is poured in several scenes, and the pouring of the coffee seems somehow more interesting than the scenes themselves. At one point a character accidentally spills some of that coffee, and that is a welcome moment of spontaneity and excitement.

Tracy Arnold as Laura Riding casts no spells, creates no enchantment. Instead she pontificates at great length about her bizarre theories of language–she claims to be creating a new, revolutionary dictionary–and the meaning of life and love and sex. Instead of an enchantress, the character she creates is more a watered-down, bus-and-truck version of Albee’s Martha–neurotic and bitchy, but without the edge and tragic dimensions of Martha. Bruce DuBose as Graves is her George, giving in to get along, and periodically flaring up into the playwright’s idea of artistic, poetic temperament. He is not up to carrying a major role. Vincent Daly plays Schuyler Jackson, a whining, insecure, emotionally volatile would-be poet and generally failed human being. It is painful to watch him moon about the stage, grimacing at odd moments, awkwardly gesturing, and generally delivering a performance that makes the viewer want to look the other way. Even with the mediocre, incompletely strung-together script, three strong actors in these roles might be able to breathe life into the experience. With the weak casting, the play sinks of its own weight.

The one performance that is arresting and intermittently fascinating is that of Suzanne Thomas as Schuyler’s wife Kit. She is a young actor of strong technique and impressive emotional range. Even faced with the monumental problem of seeming to be driven crazy by a woman who is, at best, extremely annoying, she almost manages to pull it off. She is an actor who, in a stronger role, could be mesmerizing.

The set, by David Evans Morris, depicting a windswept old house on the Connecticut shore, is simple and evocative. The costumes, by Happy Yancey, are puzzling. Graves and Riding change clothes a lot, all supposedly out of that one suitcase they brought from Spain Schuyler, on the other hand, day and night, never seems to get out of his gray shirt and gray tie.