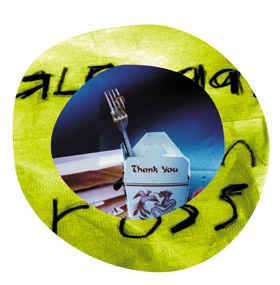 When David Mamet&#146;s Glengarry Glen Ross burst onto the American stage some two decades ago, it exploded with the force of a supernova. The language and in-your-face violence of these everyday con men and losers defined the Mamet style, creating a kind of grubby Death of a Salesman &#150; without the poetry. Since then, we have become accustomed to the &#147;f-word&#148; being slung around our stages and screens (although no one else ever has used it more than 400 times in two short acts) and deals are more likely to be closed with a click of the mouse than a sweating salesman in shirtsleeves hovering with a contract and a pen.

Nevertheless, Mamet&#146;s saga of sleazy real estate hucksters out to make a buck regardless of the cost to their souls, might still resonate with contemporary audiences, given the proper conditions. The new production at American Conservatory Theatre in San Francisco doesn&#146;t quite do the job. In the hands of director Les Waters, Mamet&#146;s pyrotechnics seem merely a blip on the screen of our consciousness &#150; something of an anachronism, much ado about very little. In spite of his impressive international credentials, Waters, who is a theater professor at UC San Diego, seems to have missed the point. Energy &#150; the kind of dangerous energy that a cast headed by Joe Mantegna brought to the original Goodman Theater Chicago premiere all those years ago.

Not that this cast isn&#146;t able. There are some very good people working out there on the ACT stage. But most of them holler and rant, rather than convince. There is less sense of truth and a feeling that, after all, we are just watching a play. James Carpenter, a fine actor, is almost wasted as a hapless, inarticulate Everyman who finds that these guys don&#146;t cheerfully refund your money when you realize you&#146;ve made a mistake. Rod Gnapp fills the officious office manager&#146;s shoes with flair. Best of all is Tony Amendola as Levene, the aging former sales star who is so desperate for money, he lends himself to the dirtiest of schemes to get it.

Roma, the fast-talking superstar who weaves a web of words to capture his prey, should be the linchpin of the action. Roma&#146;s energy and charisma is as essential as his heartlessness to the meaning of Mamet&#146;s fable. Although better in the second act than in his long monologue in Act One, Marco Barricelli just doesn&#146;t turn up the wattage necessary for the role. He&#146;s not sufficiently dangerous, nervous or smarmy. He plays Roma rather more like a nice guy who happened to audition for the part of a rat.

Perhaps in time, the seven-man cast, rounded out with John Apicella, Matt Gottleib and Brian Keith Russell in smaller roles, will meld into a true ensemble. But the director has his work cut out for him before they do.