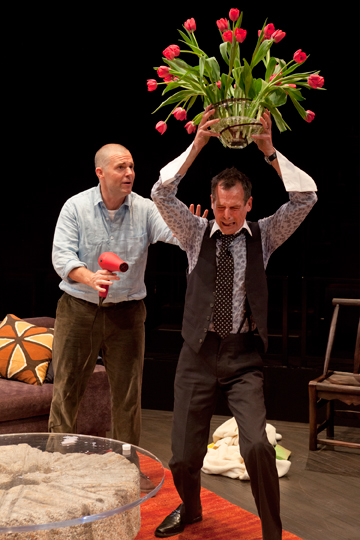 Two sets of parents gather for civilized discourse following an altercation between their 11-year-old sons; the incident involves a stick in one boy’s hand and broken teeth in the mouth of the other.

“God of Carnage” kindles the single spark of a playground squabble to light up the stage with an unflinching look at four upper-class urbanites who start out well-mannered but soon become petty children themselves. Conversations go off track and ultimately lead to a prize fight in which there are no discernible winners in this tragicomedy.

The action takes place in Brooklyn in the upscale living room of aggrieved parents Veronica (Erika Rolfsrud) and Michael Novak (Lucas Caleb Rooney). Veronica is a high-minded writer who has authored a book about violence in Darfur. Michael is a self-made wholesaler of household items but, despite his success, remains rough around the edges. The Novaks sit comfortably on a pillow-strewn sofa opposite tightly wound wealth manager Annette (Caitlin Muelder) and her corporate-attorney husband, Alan Raleigh (T. Ryder Smith), perched awkwardly on sharp-angled side chairs.

Fissures appear in the façade almost immediately as Veronica reads a prepared statement about the mishap. Alan takes exception to having his son portrayed as “armed with a stick.” Veronica agrees to substitute “furnished with a stick.” But rather than signaling solidarity, a line has been drawn in the sand.

Attempts at small talk and proffered refreshments divert discussion away from substantive issues of personal and parental responsibility. Not helping matters are ceaseless interruptions by Alan’s cell phone. These conversations do, however, reveal Alan, and his ethics, as he advises a pharmaceutical client on ways to dodge responsibility and apply damage control when a memo about undisclosed side effects of a prescription drug is leaked to the press.

Conversely, Michael’s lack of compassion becomes evident after it is revealed that he set loose his daughter’s pet hamster on the streets of New York, assuming it could just fend for itself.

Secrets are revealed, confessions follow, and alliances shift back and forth with men against men, women against men, and couples against each other. Carping escalates until the action literally bursts wide open as Annette succumbs to nerves and, in an astonishing theatrical hat trick, forcefully vomits over the set and actors and scores a direct hit on irreplaceable art books on the coffee table.

Alan’s cell phone summons him to yet another call.

French playwright Yasmina Reza has crafted “God of Carnage” into a compact, one-act play with a running time of 90 minutes. In the hands of a less-gifted writer, the exchanges could easily be left hanging in the air like a series of disjointed punch lines, but instead they provide the springboard for the next character insight or outburst.

Richard Seer’s masterful direction keeps the action coming fast and furious from a spot-on cast: Rolfsrud’s Veronica, whose outward tolerance and social consciousness is a veneer for self-righteousness and hypocrisy. Rooney’s Michael, no longer able to stomach pretense, proclaims himself a Neanderthal and is spoiling for a fight. Smith’s rude, indifferent Alan declares, “I believe in a god of carnage. He has ruled uninterruptedly since the dawn of time.” A revelation is Muelder’s performance as Annette, who at first seems a lightweight but, smoothed by Pepto Bismol and later lubricated by rum, gives as good as she gets. She also ingratiates herself to the audience when she snatches that blasted cell phone out of Alan’s hands and drowns it in a flower vase.

After seeing “God of Carnage,” I will never look at a bowl of tulips the same way again.

(2894)
$7.99 (as of January 24, 2021 - More infoProduct prices and availability are accurate as of the date/time indicated and are subject to change. Any price and availability information displayed on [relevant Amazon Site(s), as applicable] at the time of purchase will apply to the purchase of this product.)

(22086)
$3.99 (as of January 24, 2021 - More infoProduct prices and availability are accurate as of the date/time indicated and are subject to change. Any price and availability information displayed on [relevant Amazon Site(s), as applicable] at the time of purchase will apply to the purchase of this product.)

(15821)
$1.87 (as of January 24, 2021 - More infoProduct prices and availability are accurate as of the date/time indicated and are subject to change. Any price and availability information displayed on [relevant Amazon Site(s), as applicable] at the time of purchase will apply to the purchase of this product.)
related posts