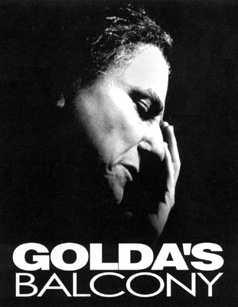 Fresh from her Tony-nominated, record-breaking New York run, Tovah Feldshuh has brought the one woman show, Golda&#146;s Balcony, to the Wadsworth Theatre in West Los Angeles. Golda, of course, is Golda Meir, Israel&#146;s Prime Minister from 1969 to 1974.Her balcony refers to both her balcony in Tel Aviv where she literally viewed Israel&#146;s evolution and the secret observation post (dubbed &#147;Golda&#146;s Balcony&#148; by the employees of Israel&#146;s secret nuclear plant, Demona) where, as prime minister she, who &#147;did not know how [her] car worked,&#148; watched Israel become a nuclear power. Eighty year old Golda, sick with leukemia, plagued by phlebitis and arthritis, reflects on her life with the vigor of a young woman and the philosophical distance of an old woman.

It comes as no surprise that Golda&#146;s Balcony is a history of Israel&#146;s first quarter century, but more than just a political history, it is the story of an extraordinary woman, looking back over her life, who did not fit the proper female mold, fighting her way to prominence before feminism, like it or not, was a household word.

With no apparent role models, Meir began her forceful social protests as a teenager in Milwaukee. Her father, mortified by his publicly outspoken daughter, told her &#147;when you are a man they will let you talk&#148; in the synagogue.Protest she did, following her own convictions to move away from Milwaukee after the eighth grade when her family told her to leave school to work in the family store. She married a man who shared her ideals but not her crusading spirit and and moved to a Kibbutz in Israel. Though guilt tugged at her about the effect her devotion to the Zionist cause and her embrace of power had upon her children, she never wavered from her dedication to Israel in a way that has always been admired in men but which is often looked at with suspicion when demonstrated by a woman.

Meir&#146;s Zionism was fiercely secular, a position which has all but disappeared in today&#146;s politics.Her passionate, honest, and earthy directness, unfiltered by focus groups, comes as a breath of fresh air after the recent American elections.Is it even possible for a politician in a major power to present him or herself so nakedly now? Would a public so accustomed to the marketer&#146;s phrase understand the complexities? Often criticized for being responsible for Israel&#146;s being caught unprepared in the Yom Kippur war, Meir was none the less a formidable leader of her people and her cause; the means to an end are not always pretty and not always best summed up by a sound bite.

William Gibson, the playwright, is an Irish Catholic, but the tone set is not that of an outsider.Meir emerges as a feisty, humorous, sometimes cantankerous, but always human figure.The time skips back and forth through her life but is easy to follow for anyone who has a memory of the period and helps to keep Golda&#146;s Balcony from being merely a rehash of history. It might present more of a challenge for someone younger to follow.

Feldshuh, a lithe, pert and petite 52-year-old actor, is unrecognizable as the eighty year old Golda. In the masterly cosmetic overhaul by John Caglione, Jr. (makeup), Jess Goldstein (costume) and Paul Huntley (wig), she takes on the lumpy shape, swollen legs, and curved spine of an octogenarian, still walking solidly in her old-lady, sensible shoes, but with fire still burning inside and a caustic wit. People who change history are not always the easiest to be around. There is no doubt; Feldshuh is not an outsider. Adopting accents that are eerily familiar to anyone who had an eastern European grandparent, she gives life to many historical and family figures, effectively and sparingly augmented by photos projected on a generic ancient wall.Set Designer, Anna Louizos, created this backdrop which, through the skillful projections (Batwin &Robbins Productions) becomes everything from the Wailing Wall to a nuclear plant.Although just one woman, and one ninety minute act, the overall effect is of a stage peopled by a full cast and varied by multiple scene changes.

(15042)
$3.45 (as of January 22, 2021 - More infoProduct prices and availability are accurate as of the date/time indicated and are subject to change. Any price and availability information displayed on [relevant Amazon Site(s), as applicable] at the time of purchase will apply to the purchase of this product.)

(6249)
$16.03 (as of January 22, 2021 - More infoProduct prices and availability are accurate as of the date/time indicated and are subject to change. Any price and availability information displayed on [relevant Amazon Site(s), as applicable] at the time of purchase will apply to the purchase of this product.)

(21917)
$3.99 (as of January 22, 2021 - More infoProduct prices and availability are accurate as of the date/time indicated and are subject to change. Any price and availability information displayed on [relevant Amazon Site(s), as applicable] at the time of purchase will apply to the purchase of this product.)
related posts