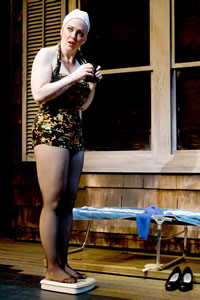 Have you heard the one about the two ladies who lived holed up in their dilapidated mansion with some 56 cats and a dog or two? You may have read about it in the papers or seen it on TV. Edith Bouvier Beale and her daughter “Little Edie” once were the toast of East Hampton. Then the town declared their house a health hazard and tried to throw them out. Enter the fairy godmother – two of them in fact – one a former first lady, now married to a fabulously rich Greek shipping magnate, and her sister, a princess in her own right. The magic wand is waved, the house is restored and everybody lives happily ever after. Or do they?

The saga of the Beales, a riches-to-rags story that sets the “Cinderella” myth on its ear is the stuff of which tabloids are made. Not only tabloids but documentaries and Broadway musicals. In its first regional theater outing “Grey Gardens” has been captured by the plucky Peninsula playhouse, TheatreWorks, and the battling Beales are once again on display in all their faded glory. It’s quite a sight.

Based on a 1975 documentary film that became something of a cult classic, “Grey Gardens” was first produced at Playwrights Horizons in 2006 and went on to a modest success on Broadway, garnering three Tony Awards. Doug Wright’s book looks back through a nostalgic lens on the 40s and then turns a sharper focus on the Beale women three decades later. Act One is a rather tedious piece of exposition but Act Two crackles with the tension of an aged mother and middle-aged daughter driven to near-madness by isolation and each other’s company. Scott Frankel’s music is pleasant, if not memorable, bearing echoes of everyone from Noel Coward to Sondheim. Performances are first-rate, as is customary with this company. Helmed by Beth Glover, who plays the mother in Act One and the daughter in Act Two (a highly-publicized gimmick of this show), they are strong singers and dancers all. But the showstopper is Dale Soules, a New York actress who made her Broadway debut in the original “Hair” and, according to her bio, hasn’t stopped since. Her portrayal of Mama Edith in Act Two ranges from heartbreaking to hilarious. Mother, here as in real life, steals the show.

The supporting cast is fine, presented as individuals in Act One and returning for double and triple duty in Act Two. Elisa Van Duyne is a charming young Edie, back in 1941 when Mummy and Daddy were still married and there was plenty of money for all. She’s about to announce her engagement to Joseph Patrick Kennedy, Jr. (a somewhat stiff Nicholas Galbraith and isn’t it odd how those Bouviers and Kennedys seemed to attract one another) when her mother – and ultimately her always-absent hypercritical father – manage to mess it all up. Paul Myrvoid is a spirited grandpa Bouvier in his big number “Marry Well, Girls, Marry Well,” and Anthony J. Haney is the long-suffering stereotyped butler, Brooks. Kathryn Foley and Carolyn Di Loreto (who shares the part with Isabella Wilcox) are the little Bouvier nieces, Jackie and Lee. Best of all is Michael Winther as George Gould Strong, Edith’s live-in accompanist, songwriter and boy toy … although, if he had his druthers he would prefer a boy of his own.

They all come back in Act Two as an assortment of back up singers for Little Edie’s routines, handymen, inspirational choir singers, teenaged boys and certain of those 56 cats. Meanwhile, Glover, who never quite gets a handle on her maternal role in the first act, turns in a topnotch performance as the girl who once had everything and now has nothing but a sense of desperation and a fear of going beyond the garden gate. The Ediths, little and big, have become each other’s jailor and prisoner in a never-ending cycle of recrimination that is hilarious when you don’t think about the tragedy that lies underneath.

Kent Nicholson directs and costumes, appropriate to the period and eccentricities of the women, are by Cathleen Edwards. J.B. Wilson designed the house – itself a character in the play – that slides open to reveal the interior, elegant in Act One, incredibly dilapidated in Act Two. The orchestra is under the deft direction of William Liberatore. But, in spite of all this talent, “Grey Gardens” remains a curiosity, much like its inhabitants – too eccentric to be taken seriously, but too interesting to be completely dismissed.