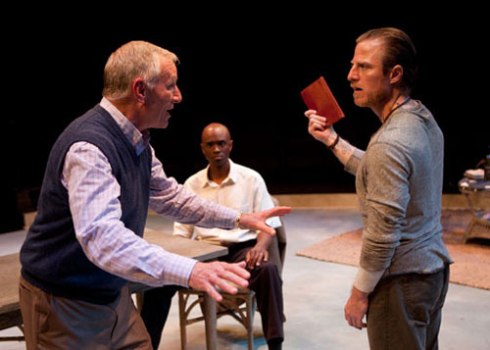 Out of all the progress our world has accomplished in the 20th century, the ones relating to open-mindedness are possibly the slowest in coming. If our country is still healing from the Civil War and celebrating the end of segregation, other nations still have a long way to go to negotiate and mend their racial tensions. South Africa, for example, has only come out of apartheid since the early 1990s. The National Party, which was in power in 1948, had instituted and enforced this legal racial segregation and the damage created by it will take years, perhaps centuries, to repair.

The early ’90s is also when South African playwright Ian Bruce (“Transit,” “Burnt!”) decided to come back home, after a 17-year political exile. In “Groundswell,” Bruce takes the audience to a beachfront resort where local diver Johan and resort worker Thami hope to team up to start a diamond-mining concession. They are both willing to work hard and know that, within a few months in the gem business, they could become rich. We learn that Thami has been away from his wife and kids to secure his job and, if his dream materializes, he could acquire a property in a nice place and move the whole family back together. Johan, who is trying to escape his own demons, is satisfied at the prospect of helping his black friend improve his family’s quality of life. If these two friends could only find an investor to bring in the initial capital they need to start their enterprise… On a stormy night, Smith, a lone and apparent well-off retired businessman, checks in for a room. Smith might just be the person Johan and Thami have been waiting for. A twisted drama, driven by desperations and disappointments, is set in motion.

Seasoned director Kyle Donnelly (the Old Globe’s “Opus,” “Orson’s Shadow,” “A Midsummer Night’s Dream”) helms this production. The beautiful in-the-round scenic design is by Kate Edmunds. Edmunds (also among the Old Globe’s “Opus” alumni) gives the audience a few essential pieces of beach-style furniture in this resort dining room. The decoration is equally appropriate: a few local taxidermied animals enhance the natural look, a diver mannequin swimming through a fishing net hangs from the ceiling, towering over a boat steering wheel recycled into a nice chandelier. To round off the atmosphere, Lindsay Jones (sound design) added the monotonous meditative sound of crashing waves and the occasional tolling of a storm bell. These soundsand perhaps a few more later in the play would have been enough, but unfortunately, their escalation becomes distracting as the action unfolds. Denitsa Bliznakova, who most recently designed costumes for the delightful “Jane Austen’s Emma—A Musical Romantic Comedy” (also at the Old Globe), did a tremendous job at creating character identities through the apparel.

The role of Johan is played by Antony Hagopian (from Broadway’s “Frost/Nixon”) and Owiso Odera is Thami (“The Overwhelming” at Roundabout Theatre Company and “Romeo and Juliet” at The Public Theater). Hagopian’s energy is powerful and drives the action. He successfully portrays a complex character in search of redemption and willing to risk everything to find it. Odera is an adequate Thami, an honest fellow with moderate convictions in the possibilities ahead and who struggles to move forward in a world of racial inequity. The character of Smith is played by the brilliant Ned Schmidtke (“Aren’t We All?” Broadway and National Tour.) The trio does a great job at building the dramatic tension in this complicated tale of greed. Johan knows that only drastic measures can help tip the racial scale, but Thami doesn’t feel quite comfortable breaking the rules. The rules, new laws introduced by the government in an attempt to mend the damage generated by apartheid, such as affirmative action, are fresh in Smith’s mind. He has worked hard to succeed and doesn’t want to see his accomplishments undermined in spite of obvious racial advantages. In “Groundswell,” race becomes the argument used to justify a man’s own right to wealth.