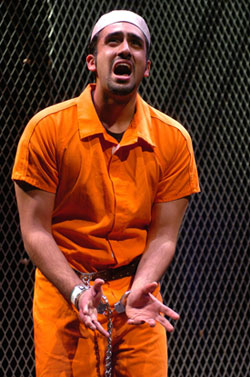 Guant�namo and Abu Ghraib are names that history will long remember to the deep shame of the United States, a shame more profound even than the detention of Japanese-Americans in camps during World War II. The latter has been recognized these many years later as the inexcusable violation of human rights that it was, but there were no allegations of torture to compound the disgrace of a powerful nation unjustly imprisoning the innocent.

Guant�namo: ‘Honor Bound to Defend Freedom,’ a British play that ran over a year in London and had a four month run off-Broadway, acknowledges that even liberal democracies infringe on human rights during wartime, but contends that at Guant�namo the United States has acted beyond the exigencies of the situation.

The play is woven entirely from the words, both written and spoken, of former detainees, members of their families, their advocates, and public officials such as Donald Rumsfeld and UK Foreign Secretary Jack Straw. It focuses particularly on a handful of British detainees at Guant�namo–Muslim British citizens–all subsequently released when the British government finally convinced the American authorities of their innocence. Most of the prisoners have not been so fortunate.

There is little here that has not been well covered in the press–the sleazy abandonment by the U.S. of both the Geneva Convention and the civilized rule of law as the government fomented national paranoia to gain support for its own lawlessness, the total denial of any meaningful due process to the detainees, and inhumane treatment such as isolation of a thinly dressed prisoner in a completely closed cell, chilled to iciness by air-conditioning.

Reading of these events in the press, though, doesn’t have as deep an emotional impact as the personal stories behind the events might convey. That’s where a strong theatrical interpretation might connect in a more visceral way and would appear to be the purpose of Guant�namo: ‘Honor Bound to Defend Freedom.’ The two or three central detainees’ stories are told, in one case by the father, in another by the brother, with contributions added by the detainees themselves (mostly through letters), attorneys, and others who were witness to the events of the time.

But the San Francisco production (reviewed from the final preview performance) is so poorly realized that it fails to provide the needed emotional connection. Noticeably under-rehearsed, actors stumbled over their lines and over the scenery. Lighting cues were so poorly handled as to be a serious distraction. Credit for direction is ambiguous in the program, the responsibility lying with either Will Pomerantz or Steven Crossley or both. Their placement of the actors on stage seemed to be arbitrary, rather than to contribute to the flow of the dialogue and an understanding of the relationships amongst the sixteen people represented.

Aside from fluffed lines, performances were at best a mixed bag, as, indeed, was the odd collection of accents in evidence. Harsh Nayyar, as the father of a detainee, managed a sympathetic and reasonably polished performance as did Julia Brothers as a solicitor. Robert Langdon Lloyd was an appropriately hateful Rumsfeld. But the three key prisoners never quite seem to find the emotional pith of their roles, leaving an audience of the already converted largely unmoved.