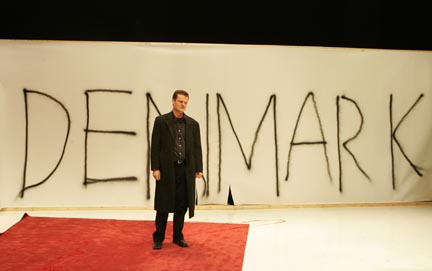 Hamlet became our badge of cultural literacy so long ago, it is well nigh impossible to see a production without stumbling over the baggage of familiarity. To list some of it as a reminder of the trouble, there’s the hero’s purported inwardness, ever since Henry Irving’s interpretation; there’s his taint of neurasthenia, obvious in Laurence Olivier’s film; there is also his ferocious intelligence, in Kevin Kline’s characterization, a trait that mitigates against tragedy–about which more later; along with his irony, anger, mockery, scorn, ferocity, introspectiveness, and maybe love according to various other actors and critics. Equally familiar are the ‘Freudian’ diagnoses of Hamlet’s troubles: he is in love with his mother; or disgusted by woman’s sexuality; or threatened by Claudius and realpolitik; or more generally, is suffering through a delayed adolescence (Hamlet is thirty!) that finally comes to a close when he kills his (step) father, claims his crown, and dies from the poisoned sword wielded by Laertes in their duel. Yet, impervious as its maker, the play survives the acid of criticism and depredations by the stage. Auden, for one, after several efforts at a summary statement of the play’s meaning, simply abandoned the pursuit, calling it an ambiguous, “baggy monster” and letting it go at that.

For the rare soul who comes new to a performance, the current production by the Classic Stage Company offers a fine introduction. The play’s status as cultural possession probably gives directors and actors a license of sorts either to choose from among current interpretations, or tackle a fresh one, a daunting enterprise. Director Brian Kulick pushes the audience out-of-doors into the theater’s dark courtyard, representing the parapet at Elsinor where Marcellus and Bernardo watch for the Ghost to appear. Some of the audience tittered self consciously; most allowed their imaginations to play out the scene until they were shepherded back indoors on the changing of the guard. (“For this relief, much thanks.”) The trick established the production’s theatrical keynote–active, engaging, fresh; far from a passive event somehow crossing the footlights. Instead, the first scene aroused curiosity, suspense, and a kind of readiness for the pleasures of the set, a white-walled, raked cube on a white tiled floor. (Mark Wendland) Theater students ought to be assigned to study all the effects of the opening scenes in this production. Complementing that simple set design were elegant costumes (Oana Botez-Ban), three piece white suits for the men, white lace gowns for the women. Two light, gilt chairs poised on a blood-red carpet suggested the combined gorgeousness and vulnerability of the throne. Hamlet, in black as always, slashes through a heavy white paper wall to stab Polonius, after which costumes change to black to visualize the darkened action.

With few exceptions, the actors speak beautifully; the play’s narrative comes clear, characterizations are persuasive, and the whole is presented with admirable restraint: no one rants or “saws the air”; no one grandstands for the audience. The production’s coherence, achieved also by wise textual cuts and a quick pace, almost persuades us that Shakespeare’s language is eloquent, contemporary English; whereas WS was of course inventing his medium overnight and performing it by day. This Hamlet (Michael Cumpsty) aims primarily at making sense–not to be gainsaid, especially given the lines’ entanglement with developing English. A matter-of-fact approach to the text by all the actors sometimes made densely packed lines sound nearly commonplace; and sometimes the m-o-f attitude itself carried the meaning. For instance, the rich imagery of Horatio’s lines reporting on the Ghost to Hamlet remains inseparable from the action:

By their oppressed and fear-surprised eyes

Within his truncheon’s length, whilst they distilled

Then too, the odd word that defeats instant recognition–who without a lexicon knows or much cares what a “fardel” may be (“who would fardels bear”)–matters little to comprehension of, say, the “To be”speech.

Remarkable for any production, but especially since the actors were not a company accustomed to performing together, speech usually found its right register, that is the boundaries within which a speech becomes meaningful, by analogy to a register in music. A poem’s register would imply the lines’ vocal range, their pitch, speed, and accent, rather than, say, merely whether the lines should sound loud or soft. (Lacking a register, for instance, a young child’s single, high note makes words sound monotonous if comprehensible.) The concept is abstract, often left to a performers’ intuition instead of to a director’s choice. In the CSC production, however, the quick pace and over all style pointed to decisions about registers by the wise director Brian Kulick, no matter what vocabulary he actually used.. Speech in Hamlet veers from conversational, to familiar, to colloquial as, say, street talk would be; some words are formal yet not stiffly literary. At the same time, the richness of Hamlet’s character calls on registers “containing” his quality of self consciousness combined with, yet also separate from, his poetry. His asides and soliloquies, seven in all before performance cuts, his helplessly literary bent as, say, in his address to the skull of the jester–“alas poor Yorick, I knew him well,” these passages and more include a healthy dose of self mockery resulting, paradoxically, in conveying not less feeling but more. That is to say, comic self reference usually undermines an idea of sentiment. To play the role and comment on it in this case amounts to comment on comment: the role- playing character is being performed by self referential actor. To simplify and get this right, the actor situates himself in a register when taking on a role. Or so I deduce from informal comments by actors with no more than polite interest in such abstractions.

Understanding the character and interpreting the lines obviously come first. Out of her combined skill and intuition, Kellie Overbey (this lovely Ophelia) found an apt register for Ophelia’s simplicity and innocence with her first appearance, no easy matter in this age when characterizations, whether of heroine or villain, seem to start from cool, sassy superficiality. Overbey magically allowed us to hear an interior, quite terrifying world in those mad speeches, nearly impossible to scan. Yet Overbey’s Ophelia is entirely plausible. She arouses a depth of sympathy difficult to articulate otherwise. No matter what it means beyond a mysterious irrationality, madness keeps Ophelia at a distance from us, while our sympathy recognizes her suffering. On this subject of character, these players quite marvelously captured and projected the tragic roles that we imagine WS wrote. Moreover, all were so strikingly good looking that instead of disappearing into the poetry, they enriched the play as seen. Gertrude (Caroline Lagerfelt), a soft, beautiful woman of feeling and restraint, with one tiny movement of her lip told that her marriage to Claudius held more accommodation than love. Her reply to Hamlet’s revelation of murder and betrayal, “thou has broke my heart in twain” managed to break through our ordinary residual awareness of actors acting. All the more puzzling, then, this Claudius (Robert Dorfman) whose voice, pace and attitude suggested a comic register. Claudius may strike some critics as a clown of a man compared to the hero, but not because WS wrote Claudius as a clown.

Otherwise, the theatricality of this production depended upon Michael Cumpsty’s Hamlet, rightly apart in black. He drinks, with exaggerated swaggering about, during the banquet scene, paces the “room” in barely contained fury, spits out his lines to Horatio; his anger is all one, starting high, nearly exceeding its cause, and thereby denying his emotion a “place” to go. So too, his fast pace was all one, undermining the thoughtfulness of the soliloquies (“now I am alone…”; “how all occasions…”; of course the “to be…”), and ultimately detracting from the text’s character dynamics. This Hamlet has little need to interpret his enemy or figure out his moves. He is instead fast, intense, determined. Cumpsty is physically a big man, with the looks of a commoner who knows what to do; he is never at a loss. He is passionate; the love scene is credible for a change and in contrast to portrayals aiming in general to enact inwardness at sacrifice of overt behavior.

The production falls one inch away from being perfect not that it is easy to fill the big, white walled, white floored playing space, which elegantly compliments the actors elegant white suits. But it all looked easy and visually seductive. Also, these remarks on the language in performance sidestep the prior question of which version of the play was being represented. (The first and fourth quartos, for instance, present widely differing plays). Most modern editions rely on the First Folio (1623), the basis for the Oxford text, and include some passages from the Second (or “Good”) Quarto of 1604 called, “The Tragical Historie of….” Program notes skip the point, but so far as could be judged from performance, the production used the Oxford text.

(2917)
$7.99 (as of January 25, 2021 - More infoProduct prices and availability are accurate as of the date/time indicated and are subject to change. Any price and availability information displayed on [relevant Amazon Site(s), as applicable] at the time of purchase will apply to the purchase of this product.)

(18810)
$6.99 (as of January 25, 2021 - More infoProduct prices and availability are accurate as of the date/time indicated and are subject to change. Any price and availability information displayed on [relevant Amazon Site(s), as applicable] at the time of purchase will apply to the purchase of this product.)

(22386)
$17.70 (as of January 25, 2021 - More infoProduct prices and availability are accurate as of the date/time indicated and are subject to change. Any price and availability information displayed on [relevant Amazon Site(s), as applicable] at the time of purchase will apply to the purchase of this product.)
related posts