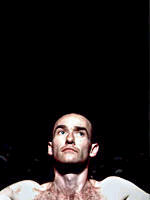 Steven Berkoff&#146;s Shakespeare&#146;s Villains is a one-man show in which the actor takes a performative tour through the Bard&#146;s darker characters. This piece, performed at the Dublin Theatre Festival some years ago and again earlier this year, did throw up some surprises though. Among the expected rogues gallery of smiling, damned villains including Richard III and Lady Macbeth was one Hamlet, Prince of Denmark. As Berkoff points out, this is a man who, by the end of the play, has murdered three people (one with minimal provocation) and been indirectly responsible for the deaths of at least four more: his mother, his girlfriend, and two of his best friends from college. Maybe Claudius isn&#146;t far wrong when he tries rein in his aggrieved nephew: "madness in great ones must not unwatched go."

There are levels of irony and role-play to the madness of Prince Hamlet, yes. Usually, regardless of how ferocious the characterization by the principal actor, there is no question that among his hidden agendas is a righteous quest for revenge. Though he may be slow to get to it, the idea is that Hamlet will eventually dispatch the rot in the State. But what if he really is insane? What if his desire to avenge the death of his father is little more than the dementia of a jealous, sexually repressed psychopath? And what if the rottenness at the core of Denmark is endemic? What if the world is not worth saving, and if the actions of the Prince amount to little more than mass murder?

Such is Calixto Bieito&#146;s Hamlet. The director of Barbaric Comedies returns to Dublin with this Birmingham Repertory Theatre and Edinburgh International Festival production brimming with vulgarity. The setting is contemporary; essentially a gaudy ballroom called the Palace where a white-suited pianist named Horatio (Karl Daymond) tickles the ivories as the audience awaits the beginning of the show. Onto stage strolls Claudius (George Costigan), King of Denmark, wearing a tux. He takes hold of the white microphone and croons "He &#145;aint heavy, he was my brother" as his party guests stagger from the wings laughing, drinking, and smoking – all but young Hamlet (George Anton), of course, who slopes moodily to his seat at the rear and sulks.

The world of Bieito&#146;s Hamlet is seething with amorality, a Denmark so steeped in wretched iniquity as to make the acts of treachery, deceit and murder committed by the Prince seem pretty much par for the course. Hamlet has a vision of his father after a cocktail of drugs and alcohol taken in despair after the first of many confrontations with his mother (Diane Fletcher) and Uncle, and though Horatio is there in the form of the ever-present pianist, his role in the action is more akin to something out of Hamlet&#146;s id, a kind of agent of his insanity who occasionally takes to the stage to kill in his name and get rid of the bodies. No one sees the ghost except Hamlet, not even us, and most of his dialogue is spoken throatily and barely audible into the piano microphone by Daymond. Maybe Hamlet is simply hearing voices, and in a world like this one, are we really surprised?

Bieito&#146;s Hamlet is never boring. Like Barbaric Comedies, it makes vulgarity part of its aesthetic and cuts through the complexities of the text through constant referral to the basest level of human interaction. The "play within the play" scene wherein the proverbial conscience of the King is to be caught features Hamlet himself in drag wearing a gaudy short dress miming intercourse and fellatio. It is not subtle, and Claudius&#146; reaction is the least of it. We all get it. The entire court, not just the marriage bed of Gertrude and Claudius is "stewed in corruption", and every character on stage seems on the verge of rape and murder.

In fact, following (and partly during) the famous "Nunnery" speech where Hamlet verbally assaults Ophelia (Rachel Pickup) with betrayed rage and sexual hysteria, he throws her onto one of the many black leather lounge chairs, rips off her panties, drops his own pants and shorts and proceeds to put into action what his words have tried to express in paradox and metaphor.

The problem with all of this, however lively an interpretation of the text, is that there really isn&#146;t much drama left. There is very little tragedy here, or any sense of moral consequence, or of righteousness or resolution of any kind. Hamlet&#146;s narrative trajectory may be vaguely heroic insofar as someone needs to put a stop to all of this, but the character as portrayed here seems not so much to experience moments of reflective pause as go through cycles of manic depression, veering from melancholy self-pity to wild violence. There is no progress in the character as he is played here, and thus no dramatic momentum. The energy of the production comes from its intentional and well realized obscenity, and though an interesting reading, it may only be so when the audience is familiar enough with the play to contextualize it.