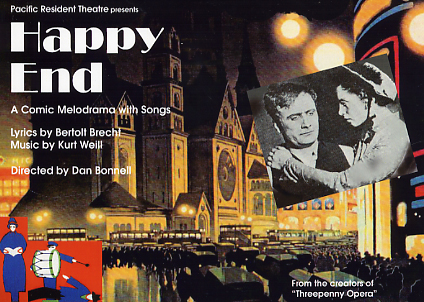 Happy End opened originally in 1929 to thunderous applause. No, strike that; Happy End opened on September 2, 1929 and closed after only seven performances. Hardly the fault of Bertolt Brecht and Kurt Weill, triumphant creators of The Threepenny Opera just one year before. Rather, it was the victim of it&#146;s star&#146;s breaking away from her role and launching a socio-economic attack upon the presumably affluent first night audience. Happy End is still more likely to play better in the urban areas of blue states than it will in red states. It opens with strikers carrying picket signs emblazoned with names of capitalistic titans such as Rockefeller and ends with the little guys (a gang of common thugs plus a battalion of Salvation Army soldiers) united against the evils of capitalism. "Robbing a bank is no crime compared to owning one," summed it up, just in case anyone missed the point.

With echoes of Shaw&#146;s Major Barbara and other early twentieth century socially conscious drama, the melodrama of Happy End is dated and the story is trite, but the music is timeless. It is also familiar. The Threepenny Opera had been such a major success that Brecht and Weill were commissioned to collaborate again to create something that would build on their triumph of the previous year. Three of Happy End&#146;s songs have become staples of the Weill legend: "Bilbao Song," "Surabaya Johnny," and "Sailor’s Song." Given how often these pieces are heard, how familiar audiences are with The ThreePenny Opera, how unfamiliar they are with Happy End, and how the music in the two productions is so similarly based, audiences can be forgiven for thinking the composer was simply repeating himself. Maybe it would be better to say Weill was polishing his already distinctive and seductive style.

If only Dean Mora, the pianist/narrator of this production, had polished his style more. Unfortunately the generally wonderful voices of the cast were not complimented by his keyboard pounding technique. Set, as it was, in either a beer hall or a Salvation Army meeting, classical subtlety would not be appropriate, but some dynamics are called for. Despite his pounding, the cast manages to rise above the piano. Lesley Fera (Sister Lillian Holiday) in particular, the beautiful and silver tongued Salvation Army soldier who falls for the slimy criminal, Bill Cracker (Timothy V. Murphy) delivers a polished, well choreographed performance. Martha Hackett is The Fly, the consummate slinky, burnt out, mastermind and head of the Gang who controls her minions with the signal, "have a light?" Which, as everyone in her world knows, translates to: you will die.

It is all pretty silly, but amusing. The music and a competent production allow for a good time for anyone willing to accept the concept that the little people, regardless of their piety or outcast status, should unite since they are all victims of a ravenous, corrupt, capitalistic system. Happy End will not sway the minds of those whose rallying cry has become "free markets for all." It will not please devotees of Andrew Lloyd Webber stage and musical glitz. The premise was radical in 1929, but in some ways it is more radical now. Yes, the political/economic formulation is simplistic, but as Tom Lehrer once said of the Lincoln Brigade, we lost, but "we had all the good songs."