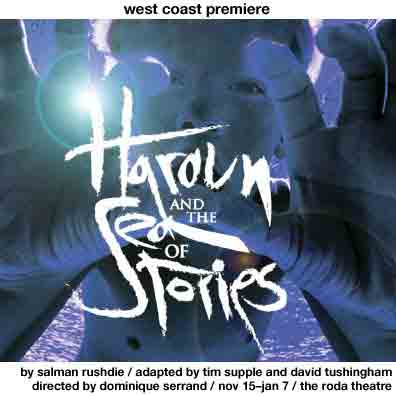 Rushdie wrote Haroun and the Sea of Stories during the long period of exile and hiding that followed a 1988 contract (fatwah) put out against him by the Ayatollah Khomeini. Occasioned by perceived blasphemies against Islam in Rushdie&#146;s The Satanic Verses, rather than succeeding in his death, the fatwah served to make him the most famous living author in the world. People who had never even read his books worried over his safety and railed against a censorship that had life-or-death at its core. But it also made the author&#146;s life an isolated hell.

Written as a kind of long distance message to his then-young son, Haroun and the Sea of Stories is, not surprisingly, about political tyranny, the suppression of free speech and the love between a father and son. In the fullness of time, the little fable with the big message was adapted by Tim Supple and David Tushingham for the stage and premiered at the Royal National Theater in London. The version newly opened at Berkeley Repertory Theatre is an adaptation of that script by Dominique Serrand and Luann Schooler. So, Haroun comes to Berkeley as rather third-hand Rushdie, albeit with most of the original language intact and the author&#146;s blessing in the form of attendance at the final week of rehearsals. Think of it, not so much as an adaptation of an adaptation, but as a beloved uncle who had to take a couple of planes, a bus and a cab to make it for Thanksgiving dinner. Not quite what he was when he started out, but nonetheless welcome.

Serrand, the multi-talented artistic director of Theatre de la Jeune Lune who created Don Juan Giovanni for Berkeley Rep in 1994, not only adapted Haroun, he co-designed the scenery (with Wil Leggett), directed and stars. Parisian-born and circus-trained, Serrand is a Renaissance man of the stage.

He plays Rashid, a professional storyteller whose powers of invention dry up after his wife runs off with the upstairs neighbor and his son questions the worth of telling tales at all. &#147;What&#146;s the use of stories that aren&#146;t even true?&#148; he asks, a question that will be echoed several times throughout the play. As soon as the words leave his mouth, young Haroun (Nora El Samahy) tries to take them back but the damage has been done. Every time Rashid stands up to perform, the words choke in his throat. Once famed as &#147;The Shah of Blah,&#148; he has run out of things to say. Meanwhile, in his once-happy home, the clocks have stopped at the hour of his wife&#146;s desertion and &#147;the air is too weepy for words.&#148;

It is up to the boy to set things right and, as all readers of stories know; only a heroic quest will do the trick. The evil Khatham Shud, Cultmaster of Bezaban (Colman Domingo who ably handles this and several other roles) has been polluting the Sea of Stories and plans to plug up the wellspring of its source, cutting off all the tales that ever were and ever will be. Haroun, with the aid of a Water Genie (David Kelly) flies to the scene on the back of a talkative Hoopoe Bird (Jerion Monroe) and many adventures ensue, including the rescue of a captive princess and a battle between the forces of darkness and light, story and anti-story. Encounters with walking, talking shadows that have minds of their own, fish that speak in rhymed couplets and floating gardens &#150; complete with gardener &#150; enliven the journey. Haroun even catches an occasional glimpse of his beautiful, aria-singing mother (Jennifer Baldwin Peden) along the way.

All of this is fanciful; much of it is funny, but the loveliest and most moving part is a kind of dream sequence wherein Haroun sees his parents, drowning in the Sea of Stories as they try to rescue fragments of the world&#146;s great literature and hand them on to their son. Ghostly and balletic, it is accompanied by overlapping voices saying things like &#147;It was the best of times, it was the worst of times&#148; and &#147;Alice peered down the rabbit hole.&#148;

The costumes, by Sonya Berlovitz, are as fantastical as the creatures that wear them and Serrand and Legget&#146;s set is a modern marvel of bright green moving platforms below and a fire engine red catwalk above. Occasional use of puppetry and rear-screen video projections adds to the magic.

At an hour-and-a-half, without intermission, Haroun may be a bit long for younger children, although its whimsy will delight them. For those who love stories enough to want to go to war themselves to defend them, Rushdie&#146;s charming tale serves as a powerful answer to the Ayatollahs of the world.