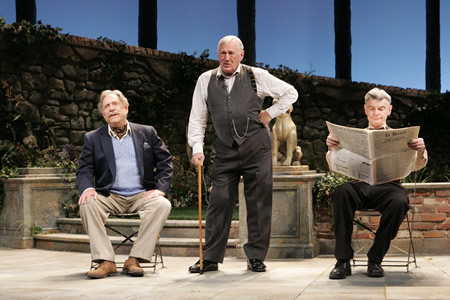 Three old guys hanging out in a park, no intermission. It does not sound promising does it? What if the guys are George Segal, Richard Benjamin, and Len Cariou, and what if Tom Stoppard is the translator who has brought a successful French work to the English stage? Sound any better? I would hope so. Sadly these three old pros are not able – nor do they seem particularly motivated – to raise Tom Stoppard’s translation of Gerald Sibleyras’ Le Vent des Popliers above the level of a sitcom: pleasant enough, but imminently forgettable.

To borrow a line from Seinfeld, Heroes is a play “about nothing.” It is 1959 and the three old men are sitting on a terrace of a French home for veterans bound together by circumstance. In addition to decaying old age what they have in common is having served in World War I and having lost the ability to live independently or plan meaningfully for the future. Oh, they can fantasize about escaping beyond the home’s walls to Indochina or, slightly more likely, going to the top of a hill lined with poplars which they can see from their terrace (the French title translates to TheWind in the Poplars), Henri (Len Cariou), with his cane, does brave a trip to the neighboring village and is rewarded by a glimpse of a class of delicious 14 year old girls and their teacher whom he compares to a lily, but we know nothing will happen. Heroes is a story without an arc and on a downward slope.

Philippe (Richard Benjamin) has lived in the home for 25 years due to a shrapnel wound to his head which causes him to faint every ten minutes and yell “we’ll take them from the rear, captain” as he regains consciousness. He is obsessed with the belief that Sister Madeline, who runs the home, is preoccupied with making birthday parties, and that people die shortly “after they blow out the candles,” He has observed that no two residents ever have the same birth date. When he hears that someone new has arrived with his birth date he becomes convinced Sister Madeline will finish him off, and the new guy will lay claim to February 12. Gustav (George Segal), a dapper aristocrat and true hero, who has lived in the veterans home for only 6 months, complains the most, and boasts of great plans of escape, but he is agoraphobic and, in truth, leaves his room only to come to this terrace. Henri, the most anchored in reality, is limited by his wounded leg. The piece depends on chemistry between the actors and regrettably the pH value of their relationships is absolutely neutral, surprising because, in fact, two of them (Benjamin and Segal) have been close friends for forty years. It is as though each actor has rehearsed individually and they have only come together for the performance. The result is mildly amusing declarations, not dialogue.

As for the play, that is about it … for 100 intermissionless minutes. It is hard to know the content of the original French. Heroes is often compared to Art, another translation from the French that is conversation, not story based, a much more French construction than an American one. Perhaps this translation has sapped Heroes of its bite. I would expect more than sitcom level comedy from a man like Stoppard who elsewhere can turn a phrase such as, “ Old age is a high price for maturity,” or “Eternity is a terrible thought. I mean, where is it going to end?” Lacking a trace of poignancy Heroes becomes a string of forgettable one liners.

But sitcom it is. Often amusing, audience laughter seems like a laugh track and you laugh along. It is OK that this pilot is not being picked up by the network, but it was painless to watch and might be relaxing after a hard day at work. Do make sure that laugh track is in place.