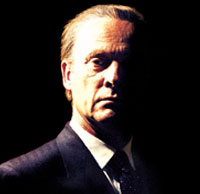 There are interesting thematic and structural feints in Sebastian Barry&#146;s new play, and it contains enough political, philosophical, and psychological threads to suggest a genuine attempt at theatrical discourse. The story at its heart is a thinly disguised account of the recent decline and fall of Irish politician Charles Haughey. Haughey was in power periodically throughout the 1980s and though always surrounded by rumors of graft, survived without loss of face until after his retirement. He is now the subject of investigation by the courts and vilification in the press, much of the latter inspired by memories of the hardships endured by ordinary citizens while he himself lived in splendor.

Armed with their experience of historical fact, most Irish audiences will be able to respond to what they see beyond the text. The majority of those who encounter the play in the course of its UK tour will probably wonder if there is quite enough drama on stage to justify its attempts to fashion this man into a figure of almost Shakespearean complexity; at once sympathetic and despicable, human and monstrous, and pathetic and terrifying. Charlie Haughey is not King Lear, or Richard III, and in spite of Barry&#146;s frequent citation of classic works of poetry and drama, this person does not (yet) deserve the monumental treatment he receives in this fictionalization and this character is not interesting enough to sustain the weight of the play.

One of Barry&#146;s more effective conceits is to structure its story around a domestic drama. Set in the luxurious mansion of former Taoiseach Johnny Silvester (Patrick Malahide), it is a story of a husband and father on the edge. As he waits anxiously for political developments now outside of his control (a tribunal is investigating his finances and he is being hounded by the press), he also awaits news from the doctor regarding a prostate examination. Meanwhile, more personal issues need to be addressed with both his wife and son.

His wife, Daisy (Dearbhla Molloy), is torn between feelings of affection and resentment. She is still reeling from the revelations of his decades-long affair with a high profile journalist, not to mention the years of marital indifference and neglect. His son, Jack (Phelim Drew), is recovering from a mental breakdown, uncertain about what being the son of Johnny Silvester really means. Issues are explored in the course of two days during which a series of confrontations force John to look at who and what he is, was, and he has become in the eyes of himself, his family, and the nation beyond.

Using the family story as the anchor allows Barry to indulge in many long passages of political and philosophical reflection. There is not a lot of dramatic action, but there are a great number of speeches and exchanges which reflect on developments in the perception of politics and politicians in Ireland in the last ten years. There are also frequent metaphorical references to various &#145;hinterlands&#146; of peace and reflection, places of phantasmagorical qualities suggesting lost or disappearing spaces in the Irish psyche. The domestic elements serve to remind the audience of the characters&#146; humanity, which can be difficult as they expound loudly on what it means to love one&#146;s country while also serving one&#146;s own interests. Barry attempts to get inside the mind and heart of this character, and in doing so hopes to illustrate some of the pressing issues affecting contemporary Ireland in a way which is also universal.

Barry&#146;s dialogue is rich with reference and reflection. There is much to admire in the language, which often aspires to poetry. The play frequently does give pause for thought about the nature of personal and political leadership, though its explicit linking of the two on a symbolic level is heavy handed. There is a sense that we are being lectured to far too often though, and clever and engaging as parts of the lecture are, they lack dramatic urgency. Barry’s conclusions also tend towards the obvious and are arguably overstated. The playwright puts too much weight on the characters and story to sustain its lofty allegorical and thematic preoccupations. Its ruminations on love seem misplaced.

Malahide has good presence in the lead, but Irish audiences will find it difficult to see his performance as much more than a pantomime variant on the mannerisms of Charles Haughey. Most of the other actors are solid enough, including James Hayes as a domestic servant who makes one or two winceworthy speeches about the class system and Kieran Ahern as the ghost of an old friend (Irish audiences will immediately recognize the figure he represents) who, in classic Dickensian style, comes to warn Silvester about his trajectory towards damnation. Unfortunately Lucianne McEvoy is extremely stilted as a student who interviews the great statesman and Anna Healy is campy as the &#145;other woman&#146; who haunts Silvester&#146;s private life even though the affair has ended. There are some cheap laughs in these characters, but such humor should be beneath a work which expects to be taken this seriously.