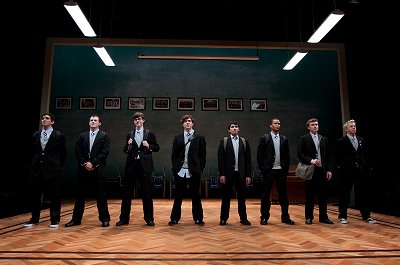 Terrence Nolen, artistic director of the Arden Theater has been expert
in scaling down musicals for more theatrical punch and he shows equal
skill with challenging drama in delivering a finely tuned version of
Alan Bennett’s ‘The History Boys’ to open the Arden season.

As good as the acting was in the film version of Bennett‘s play, there
seemed to be something missing and after seeing the untruncated
version  you find out what.  Bennett has written a complex and wordy
classic to be played by a tight ensemble of actors onstage, sustaining
for 3 hours.

Bennett’s British boys are on the brink of manhood finishing their
six forms in an  undistinguished prep school in Northern England in
the 80s,  They are under the spell of nonconformist aesthetician,
Hector (Frank X) who wants them to discover their inner lives as well
as the classics.

They are also under the practical instruction of Dorothy Lintott
(Maureen Torsney-Weir) who has to as she puts it “teaching five
centuries of masculine ineptitude.”  Irwin (Matthew Amendt), an
academic strategist   toughens them up as they vie for admittance into
Oxford.

Bennett’s classroom sessions have a veracity that frame
characterizations beyond stock types,  a mainstay British schoolroom
dramas from ‘Goodbye, Mr. Chips’ to ‘If…‘  The heady dialogue, loaded
with literary and historical banter, is tightly paced by Nolan, who
keeps everybody moving physically, when they aren’t engaging in
intellectual jousting.

There were comments in the audience that the actors were talking too
fast and since they had various British dialects, should slow it down.
Their accent pacing, is, in fact, particularly impressive, as an
intrinsic element of the play, evoking class and region.

Nolen has built an electric ensemble of young actors as the student
corps and seasoned vets as faculty members.  Evan Jonigkett is the
manipulative Dakin, who seduces physically and intellectually, cracks
open the psychosexual undertow.  Michael Doherty is the unashamed
’nancy’ boy who  is open about being in love with him and camps it up
singing Edith Piaf songs (to his mates’ (and the audience’s delight).

All of the eight young actors playing the students have great moments.
Some are priceless, like the intellectual scrapper Rudge, who gets
the biggest laugh of the evening by telling the college Dons that
“History is just one fucking thing after another.”   The scenes of the
actors playing a bordello scene to practice their French and
melodramatic scenes from movies like ‘Now, Voyager’ and ‘Brief
Encounter’ are hilarious.

Torsney-Weir may be the token women on staff at the school, but she is
not as the only women in this cast, holding her own with moving
reserve.  Particularly poignant in her scenes with Frank X, whose
gorgeous articulation of script and ideas,  resonant the inner life of
Hector, just fills the theater, yet never is outsized.  Hector’s
creepy improprieties with the boys, on his motorbike is tolerated as a
pathetic eccentricity, but its consequences loom large for everyone
and put into perspective by (who else) Dorothy.