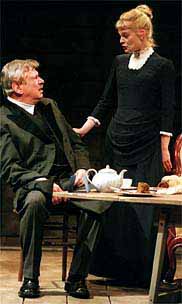 Off-Broadway is traditionally known for experimental theatre. So how about an experiment that provides the following: a good story of the romantic-comedy genre, with some real romance and genuinely funny lines and situations, a stage full of colorful, appealing characters, acting that is bright and delicious, right down to the smallest roles; handsome sets; lighting that enhances, without calling attention to itself with a cue every other line; costumes that range from perfectly adequate to droll, winning a laugh or two on their own: skilled direction that sharpens the (mostly) sprightly moments of the play and eases the cast past the (occasionally) clunky ones.

The results of this experiment are absolutely delightful in this revival of Harold Brighouse’s 1915 play Hobson’s Choice. To make this play work three roles must be perfectly cast, and in David Warren’s production they are. First is Henry Horatio Hobson himself, the curmudgeonly, prosperous self-made owner of a boot and shoe store in 1880s England. Charles Laughton played the role in David Lean’s 1953 film version, and here Brian Murray (recently of Albee’s The Play About The Baby) seems born to the role. He huffs, he sputters, and he looks as though he’s bitten down hard on a lemon as he reacts to the surprises that his daughter Maggie throws at him.

Maggie Hobson is the oldest of three Hobson daughters, and is the second role that must be perfectly cast for the play to work. As Maggie, Martha Plimpton is a trim, attractive, even sexy steamroller. Old Hobson clearly meant her to be a chip-off-the-old-block, created by him to be the perfect cog in his little boot business, running things, keeping the books, and selling up a storm. Nowadays widower Hobson spends most of his time down at the Moonraker Pub with his pals. Maybe, just maybe, he’ll let his two younger daughters wed and leave the shop, but he firmly believes that Maggie is, at 30, too old. And besides, he can’t get along without her.

Maggie disagrees. She intends to wed and escape, and even has a man in mind, although when the audience first sees him he seems more like a sky mole crawling out of his lair, climbing the ladder from the workshop in the cellar. This is Willie Mossop, played by David Aaron Baker—timid, almost pre-verbal, but a genius bootmaker. His boots and shoes, made a pair at a time for the carriage trade, are what keeps Hobson in business.

Baker is to acting what Willie is to boots—a master craftsman. Recently seen off-Broadway as a flustered, soft-hearted attorney in Rebecca Gilman’s The Glory of Living, here he goes through a fascinating transformation into a sharp, quick-witted, ambitious entrepreneur. It is, of course, Maggie who effects the change. He is soft clay in her hands, and it is a tribute to Plimpton’s performance that she makes her non-stop bullying look like great fun, for him and for her. On their wedding night the shy Willie has to be dragged off by the ear to the marriage bed, but Maggie seems to have the situation well in hand, to the ultimate delight of both. She’s a woman who is not going to be cheated out of anything.

An important test of any large-cast production is the quality of the actors in the small roles. In Hobson’s Choice, for example, when Peter Maloney strides onstage for his ten minute performance as a gruff, shrewd doctor, the quality sags not an iota. The same is true of Judith Roberts as a lady of quality come to sing the praises of Willie’s skill; and of Aedin Moloney as the girl Willie leaves behind—and, indeed of the entire cast.

Five minutes or so into the play there’s an almost audible sigh of relief from the audience. There’s to be nothing too demanding, but not too simple either, plenty of laughs, a bit of romance, eccentric characters, an actual plot to follow with ups and downs, and a romance between two quirky but likeable folks. What an experiment!