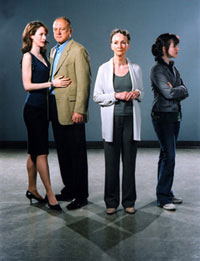 There is honor among thieves, honor thy father and mother and the honor of the corps. Then there&#146;s the sort of honor that one partner is supposed to accord the other in a relationship &#150; and the honor due to the relationship itself. It&#146;s these last two that occupy Joanna Murray-Smith in her play of the same name, inexplicably spelled Honour.

Berkeley Rep artistic director Tony Taccone has put together an absorbing and fast-moving production of Honour in which the parts are greater than the whole. A fine cast, headed by the luminous Kathleen Chalfant (Angels in America) as the betrayed wife Honor (without the &#147;u&#148;) and John Doman (The Wire) as the husband who has done her wrong in an attempt to put himself right.

Gus is a middle-aged newspaper columnist of some importance, married for more than three decades to a once prize-winning poet who has subjugated her ambitions to his. Prominent enough to be included in a book of ten influential writers, he is visited and repeatedly interviewed by the book&#146;s twenty-something author. Claudia (Christa Scott-Reed) is as bright as she is comely. Anybody want to guess what happens next?

In a society where, according to the program, a whopping 67 percent of all first marriages end in divorce, this is not a particularly original situation. There are plenty of successful middle-aged men who seek to regain their youth through a younger lover, abandoning the faithful, equally middle-aged wife who stuck by them during the hard times. What is original is the way in which this playwright handles the situation. In the beginning, there’s a flood of clever dialogue as Honor and Gus talk about the failing marriage of some friends and Gus and the interviewer try to impress one another. When things start to fall apart, however, words seem to fail. The formerly glib characters communicate haltingly, in half-sentences and monosyllables. Perhaps this is the emotion that has been masked by all those words for too long. It&#146;s a neat device and, staging the scenes as a series of brief episodic conversations, Murray-Smith handles it beautifully.

To say that Honor is stunned when her husband announces he is leaving her is to understate. In an exquisitely modulated performance, Chalfant goes from shock and disbelief to fury and fear, eventually pulling herself forward into a new life. Before that happens, however, she faces the pity and scorn of her grown daughter (Emily Donahoe) and her rival, both of whom accuse her of giving her life away. But, up until the moment of desertion, Honor has been content with the bargain, gaining comfort and safety in exchange for independence and fame. Now she warns her devastated daughter &#147;Don&#146;t become me.&#148;

It&#146;s far from an uncommon problem and many in the audience who grew up in the compliant 1950s of Mary Tyler Moore in an apron and &#147;Hi, honey, I&#146;m home&#148; will recognize either themselves or someone they know. Gus, although less sympathetic, is no so much painted as a villain as a man in torment, denying he is in a mid-life crisis even as he displays all the classic symptoms and signs. And Claudia is no bimbo. She is an intellectual, a seeker after truth &#150; although admittedly a little short on compassion. She does not love as much as she loves to be loved. Looking into her lover&#146;s adoring eyes is better than looking into a mirror. Eventually she is perceptive enough to see herself as something of a mugger, taking what she wants and leaving a body or two lying in the street.

Sophie, the daughter, is similarly self-involved, finally admitting that what she needs is not the happiness of her parents for their own sakes but to feel herself safe and secure within their bond.

Honour rushes by in a torrent of words to its almost-predictable conclusion. But the truth of it seems to lie in the broken sentences and the things half said.