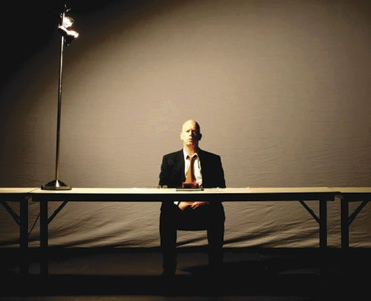 Rinde Eckert, author of And God Created Great Whales, is back on stage with his new theater work entitled Horizon. Like Great Whales, Horizon addresses the big questions of life through radical storytelling. Horizon centers on a theologian named Reinhart Poole who has been fired from a seminary where he teaches ethics. Why he is fired relates to some fear the head of the seminary has about what Poole teaches. &#147;Perhaps when this fever dies down, we can start again,&#148; is the explanation and excuse by Poole&#146;s superior. The timeframe is Poole&#146;s last class. Poole is loosely based on the life and teachings of German-American Reinhold Niebuhr and Eckert&#146;s grandfather who was a Lutheran minister at a seminary in Fremont, Nebraska.

Eckert, who composes original music for his plays and also takes the leading role, is a minimalist. Horizon has three players, Eckert as Reinhart Poole and David Barlow and Howard Swain who play a variety of roles. Barlow and Swain&#146;s roles include Poole&#146;s students, Poole&#146;s family members, the head of the seminary, and two stonemasons who are characters from a play Poole is writing. The set is limited to a collection of props: a couple of piles of cinder blocks, tables, and easels that hold a series of chalkboards. The opening music repeats in the manner pioneered by Minimalist composer Philip Glass. In the post-modern style, Eckert as playwright fractures time and thus the action of Poole teaching the last class begins multiple times. In a scene featuring a rose that is deemed nothing more than a rose, Eckert also makes a nod to Gertrude Stein who was a precursor to the minimalist art movement.

The complexity that brings life to this subject of a man struggling to accept the loss of his career as a Socratic professor much engaged with appreciative students is that the professor is writing a play about stonemasons who are constructing and reconstructing the foundation of a church that once stood in Europe. The church is supposed to become a tourist attraction in a dying mid-western town. The problem is the stonemasons cannot get beyond the foundation. In a breach of reality, Poole deconstructs what the stonemasons have built. Therefore it is not clear if the problem of progressing beyond the church&#146;s foundation is part of Poole&#146;s play or merely that Poole cannot decide how to write his play.

Horizon continually flips into alternate realities that involve the subjects of Poole&#146;s teachings &#150; faith, revelation, martyrdom, truth. In a couple of scenes, characters stand and move on cinder blocks as if they were walking. The first time this happens, one of the characters turns out to be the devil who says, &#147;Man is afraid of the truth.&#148; The elevated players tipping the cinderblocks as they walk effectively change themselves from ordinary characters to supernatural beings. Eckert reaches into some primitive pocket of the mind as these actors move on ordinary cinderblocks.

Another movement technique that Eckert uses is subtle puppetry. Shadows cast by hands represent unseen horses fleeing a still landscape. Professor Poole&#146;s hands held over the head of first one actor and then the other suggest a puppet master with his marionettes. A hand thrust over the cinderblock wall becomes a rose and a fight ensues in the window of the wall that tracks like an episode from Punch and Judy.

The recorded music consists entirely of Eckert&#146;s compositions, performed by him on such instruments as an antique organ. Occasionally the three actors break out into comic harmonies that include barbershop and country styles. The acting team of Eckert, Barlow and Swain work together like a well-oiled machine. No one, including Eckert, upstages anyone else. Although the 90-minute work could benefit from cutting about 20 to 30 minutes of spoken text, the subject matter and approach are engaging.

$2.88 (as of January 21, 2021 - More infoProduct prices and availability are accurate as of the date/time indicated and are subject to change. Any price and availability information displayed on [relevant Amazon Site(s), as applicable] at the time of purchase will apply to the purchase of this product.)

(21825)
$3.99 (as of January 21, 2021 - More infoProduct prices and availability are accurate as of the date/time indicated and are subject to change. Any price and availability information displayed on [relevant Amazon Site(s), as applicable] at the time of purchase will apply to the purchase of this product.)
related posts