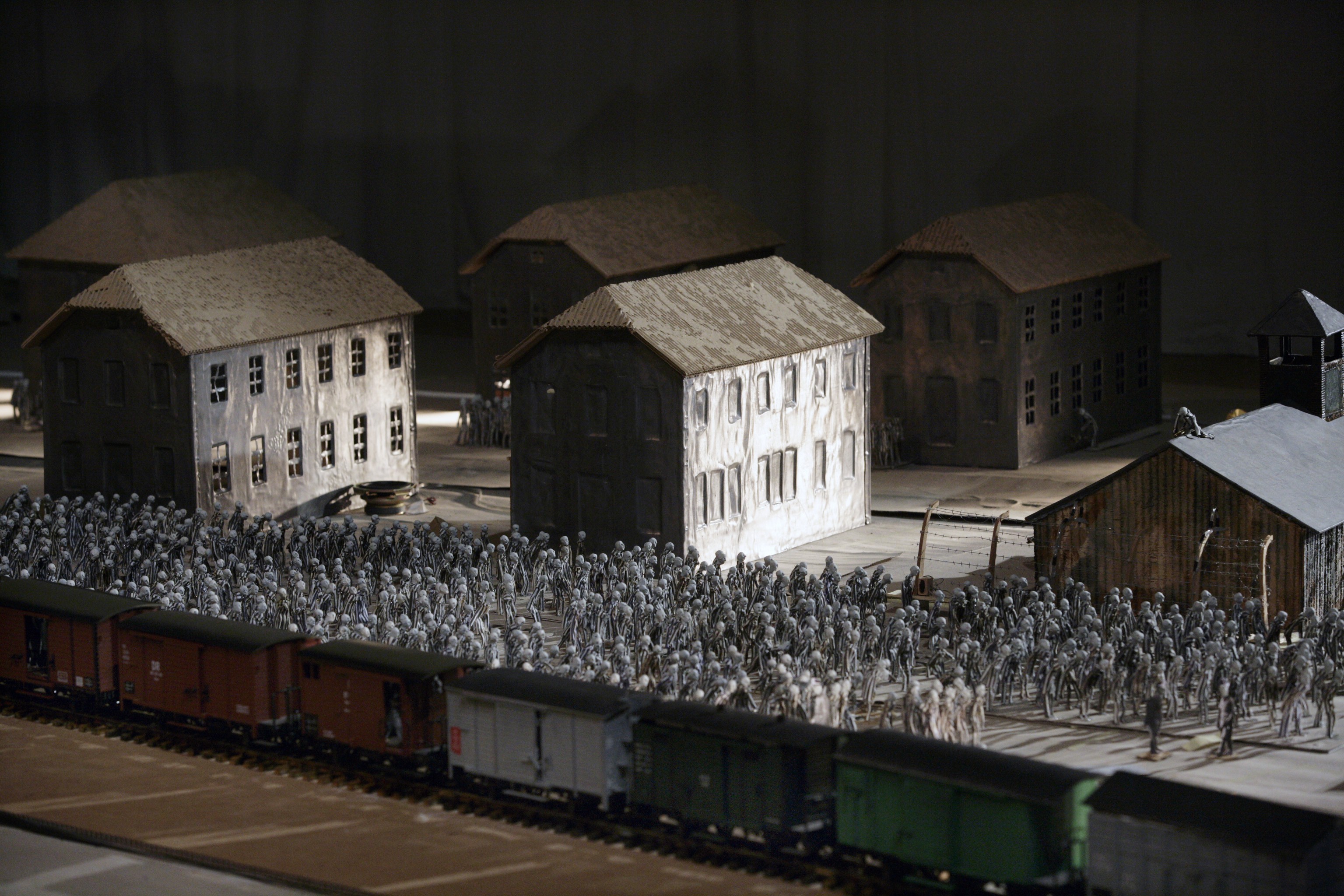 KAMP is a presentation involving some 3000 hand-crafted puppets on a
miniature set depicting the Auschwitz concentration camp in the
latter days of Word War II. It depicts without dialogue the day-to-
day physical activities at the camp, from the mundanities of sweeping
and digging to the equally routine operations of the gas chambers and
crematoria. There are no individual characters, no narrative to speak
of, and neither a sense of closure or redemption. Events are seen
both in the physical manipulation of the puppets and the set by
puppet makers and performers Herman Helle, Pauline Kalker, and Arlène
Hoornweg, who are in full view, but also through the lens of a set of
live miniature cameras used to focus in on detail, the images of
which are projected onto the rear wall of the set.

The great Czech animator Jan Svankmajer once said that animation
isn’t about making objects move, it’s about bringing them to life,
and this statement seems especially apt in the context of the
representation of the Holocaust. This has become our most elemental
symbolic evocation of the experience of life and death, and it has
increasingly become symbolic and semiotic in function as history has
created great distance between the events themselves and those now
receiving images of them second, third, and even fourth hand. The
programme notes for KAMP quote Adorno’s famous proclamation that
after Auschwitz there could be no more poetry, but also, less
characteristically, his recanting of that aphorism and recognition
that a suffering has a right to expression. The problem remains
though, what form should that expression take?

To any student of history, let alone art, the Holocaust is both
wholly concievable and eminently imaginable, in spite of a critical
proclivity to declare to the contrary with some sanctimony. It
happened then, it had happened before, and it has happened sense
insofar as what it is about is an act of genocide and ethnic
cleansing based upon a perception of superiority or entitlement by
one group of people to the cost of another. Is the 1940s Holocaust
really just about scale? About the number who died? Or about the
particulars of race in the context of an even longer historical
framework? The overriding commonality of all acts of genocide
throughout human history and projecting to the future is that all
have been carried out by human beings against other human beings. It
is humanity that is at stake, and empathy between humans that
continues to be lacking.

The genius of KAMP is its stripping of the element of humanity from
the representation of human suffering by is projection of pain,
torture, suffering, and death onto wholly inanimate objects. In the
sense of Svankmajer’s use of the term it ‘brings them to life’, but a
very specific kind of life, active on a level of signification that
demands both attention and an emotional response. The startling
violence of a beating inflicted upon an exhausted prisoner by a camp
guard evokes the childhood comic terror of Mr. Punch beating his wife
senseless with a stick, reminding us that nothing is ever wholly
innocent when in a state of signification. The struggles of another
puppet to scoop granules representing Zyklon B into a small hole in
the top of the gas chamber built from corrugated cardboard becomes,
on one level, a technical challenge as the tiny, jointed hand is
manipulated to accomplish the action; but on another level, the
implied banality and physicality of the action brings with it an
accumulation of sober fear. Even the issue of scale is brilliantly
evoked by the perspective of the audience seated so far away from and
above the ‘action’ of the large set and the occasional interpolations
of the camera, which draws us closer from time to time and yet
continues to reinforce the sense of uncanny dissociation that turns
the moral mind away from ‘mere’ representation and towards its meaning.

KAMP is a truly marvellous achievement, proving the continuing
marvels of the tradition of puppet theatre that has documented and
interpreted human myth and history for thousands of years. The
overlay of contemporary technology (video feedback) is unobtrusive
and appropriate, and there is both much to admire here in terms of
skill and technique and also much to stimulate and provoke in the
challenge it presents to its audience.