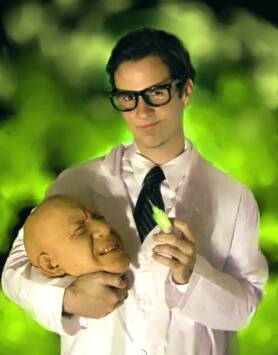 In the low-budget, high-aspiration realm of Off-Off Broadway, Dan Bianchi’s seven-year-old company Radiotheatre has gained something of a reputation for mounting productions of classic horror stories that rely exclusively on sound and voice to get audiences to imagine crazy, gory scenes that could never be realistically staged. Its latest project is a year-long festival devoted to the work of H. P. Lovecraft, whose early 20th-century fantasy and horror fiction left its mark on virtually all practitioners in those pulpy genres since then.

The current production consists of minimally staged readings of two seminal Lovecraft stories. “The Call of Cthulhu” provides a handy introduction to the segment of Lovecraft’s oeuvre revolving around the eponymous mythological figure, the head priest of a cult devoted to the Great Old Ones, long-dead ancestors who maintain a following by inserting themselves into dreams “like radio transmissions,” often driving people insane. The story itself is a multi-layered account linking the discovery of an antique sculpture of Cthulhu—said to have the head of an octopus and the body of a dragon, with scaly wings—with an orgiastic ceremony conducted by hardcore voodoo worshippers witnessed in the swamps of Louisiana.

“Re-Animator,” which was made into a popular Hollywood movie in 1985, tells the story of Dr. Herbert West, a Frankenstein-like mad scientist obsessed with developing a magical elixir to bring dead bodies back to life. The ruthlessness of his search for corpses and the various ways his experiments don’t turn out as planned account for both the gruesomeness and the bleak humor that are typical to Lovecraft. “I’ve solved the issue of freshness,” West is likely to say when his search takes him to the battlefields of Europe during the Great War. Or “Hold still while I finish severing Major Hill’s head.”

Both tales are performed as duets by Frank Zilinyi and Eric Whitten, two perfectly fine actors with expressive voices. Given the company’s concentration on sound, though, I was surprised at the low quality of the theater’s sound system; the musical underscoring and sound effects only slightly exceeded the murky blare of a neighbor’s television bleeding through from an adjacent apartment. And the actors missed numerous opportunities for tonal variation. They tended to pitch back and forth from BBC radio announcer pleasantry to overwrought shouting into microphones with nothing in between. At the performance I saw, Zilinyi’s mike went dead for a few minutes, which brought his volume level to one perfectly suitable for a tiny basement theater in the East Village. Meanwhile, Whitten continued shouting into his microphone—either oblivious to the technical failure or unwilling to surrender the thing that’s most fun about the job.