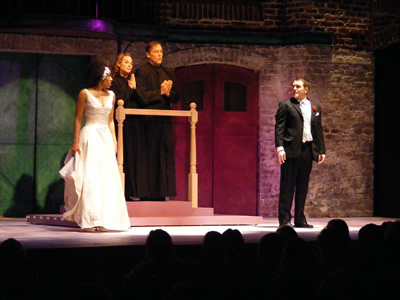 By Joe DiPeitro (book and lyrics) and Jimmy Roberts (music)

If you want a live theater performance that will not send you into the night with homework or, worse, keep you awake in your bed, I Love You, You Are Perfect, Now Change, is your ticket to an evening of no-strings fun. The eleven-year-running Off-Broadway musical about heterosexual love (absolutely no gay or bi-racial relationships) has played over 4,500 performances exceeding such Broadway smashes as My Fair Lady, Annie, South Pacific, Oklahoma, Grease, Miss Saigon, 42nd Street, Fiddler on the Roof, and Hello, Dolly. It has won eight international best musical awards and been translated into 11 different languages. The creative team of Joe DiPeitro (book and lyrics) and Jimmy Roberts (music) has created a comfortably paced theater experience with hilarious situations and catchy tunes.

The Bethesda Theatre, a newly renovated art deco film theater dating from 1938 in the heart of Bethesda, Maryland’s business district and minutes from a station on Washington, DC’s subway system, has mounted a new production of I Love You as its first offering of its first season. This reviewer saw a performance on October 9, 2007. Built into this production are mentions of local venues such as the Lorton Correctional facility (this Virginia prison closed in 2002 but I Love You situates an exceptionally comic scene in the working prison) and the National Gallery of Art with its current Edward Hopper exhibition. Should anyone worry about in what year this musical is set? Probably not, but let’s say the time is before gay marriages became a regular news headline.

Most of the situations between singles and married couples in I Love You seem tritely familiar—the lack of good single men for sexy normal women, the manly man who cannot ask for driving directions, the man who wants to see shoot-em-up films because chick flicks unbeknownst to him make him blubber like a baby, the new parents whose minds turn into pabulum with the arrival of their new baby, the home-owning couple with kids and a live-in elderly parent nearly beaten down by their chores until they hear the clarion call of sex and the marriage tango. What make each scene enjoyable is the right-on-the-money acting and singing by the Broadway veterans Jean Arbieter, Scott Evans, Marcie Henderson, and Timothy Warmen. One of the more innovative situations is the scared-straight-to-the-alter scene where player Timothy Warmen in an orange prison jumpsuit looms like a Frankenstein over two picky singles with nothing in common while the old-maidish singles-event organizer (Jean Arbieter) metaphorically clucks with satisfaction when her charges, scared for their present (not future) lives clutch each other desperately and commit to marriage. The scene has a Saturday Night Live feel to it. Also this scene points to the ease at which each of these young performers slip into roles that might involve much older characters.

Director Andy Gale is a veteran of this musical with productions to his directorial credit from Allentown, PA, to Australia. It shows. His artistic staff produce nicely modulated light (Ray Cullom) and sound (Neil McFadden) and have produced a pleasing set design (Neil Peter Jampolis) in keeping with the original set design. Musical director Vince Dimura has selected a pianist and a violinist who not only play the country to classical variety of compositions well but also these musicians add personality. Throughout the entire show, the audience sees the musicians who are placed on a balcony stage center.

So plan a great meal before the show, bring your grandmother and adult children or bring your business staff and associates. Then sit back and let the laughing flow. Many people have asked composer Jimmy Roberts why the show has been so successful. "People feel better when they leave this show than when they came in" has been his reply. This is the truth.