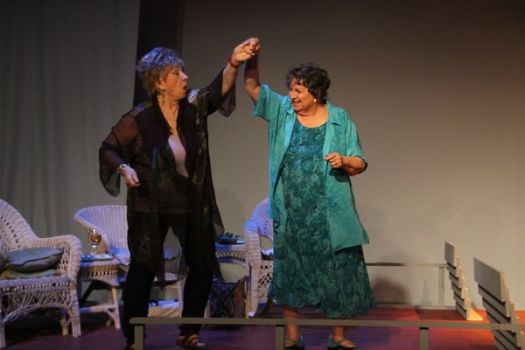 ‘If We Are Women’

I found myself thinking — as I watched the four female characters in “If We Are Women” — that there’s another sort of matrilineal chain as well. It may not have the biochemical reality of genes, but it’s there nevertheless in the ways that most mothers and grandmothers try to guide, instruct and protect their daughters and granddaughters. (Truth in reviewing: I have three adult daughters and three young granddaughters).

This thread runs through “If We Are Women.” Polly Cohen (Annie Mackay) is the 19-year-old daughter of 40-something Jessica MacMillan Cohen (Lisa McGee-Mann) and the granddaughter of Rachel Cohen (Marcia Loring) and Ruth MacMillan (Jacque Lynn Colton), both in their 60s.

Having just been introduced into the joys of sex by a young man, Polly now knows everything there is to know about life, love and liberation and is determined to throw away her hard-won admission to Yale so she can run off with her newfound lover to aColorado organic farm. Needless to say, her mother and two grandmothers regard this as Not Exactly The Most Wonderful Idea Ever.

Each has her own particular reason for discouraging Polly from this plan and takes turns trying to dissuade the girl — despite her sexual initiation, Polly is still very much an adolescent— from repeating their own unhappy life experiences.Rachel is a credible, urbane, Jewish bubbie who feels she could have done much more with her life if she had but graduated from a college with the prestige of Yale; Ruth believes her life was wasted on a desolate Canadian farm where the demands for daily survival prevented her from ever learning to read and write; Jessica — or Jesse — is distraught that her daughter’sexciting new relationship might prove to be as short-lived and illusory as her marriage and subsequentdivorce from Polly’s biological father (Rachel’s son) and the more recent death of a boyfriend whose fidelity has become suspect.

Director Sherry Netherland deftly steers her four actors through their paces, but that’s the problem I had with this play: the paces aren’t very engaging. Occasionally witty, insightful and even touching, “If We Are Women” is still a thin work in that the older women’s disappointments don’t seem all that compelling and the granddaughter’s foolishness not all that irreversible. Rachel still had a modest career, Ruth has her small pleasures in TV soaps and Jesse is a successful writer.

So what if Polly rejects all those motherly/grandmotherly well-intentioned, loving concerns and runs off to Colorado, only to come to her senses a year later — would Yale bar the door to her re-entry?